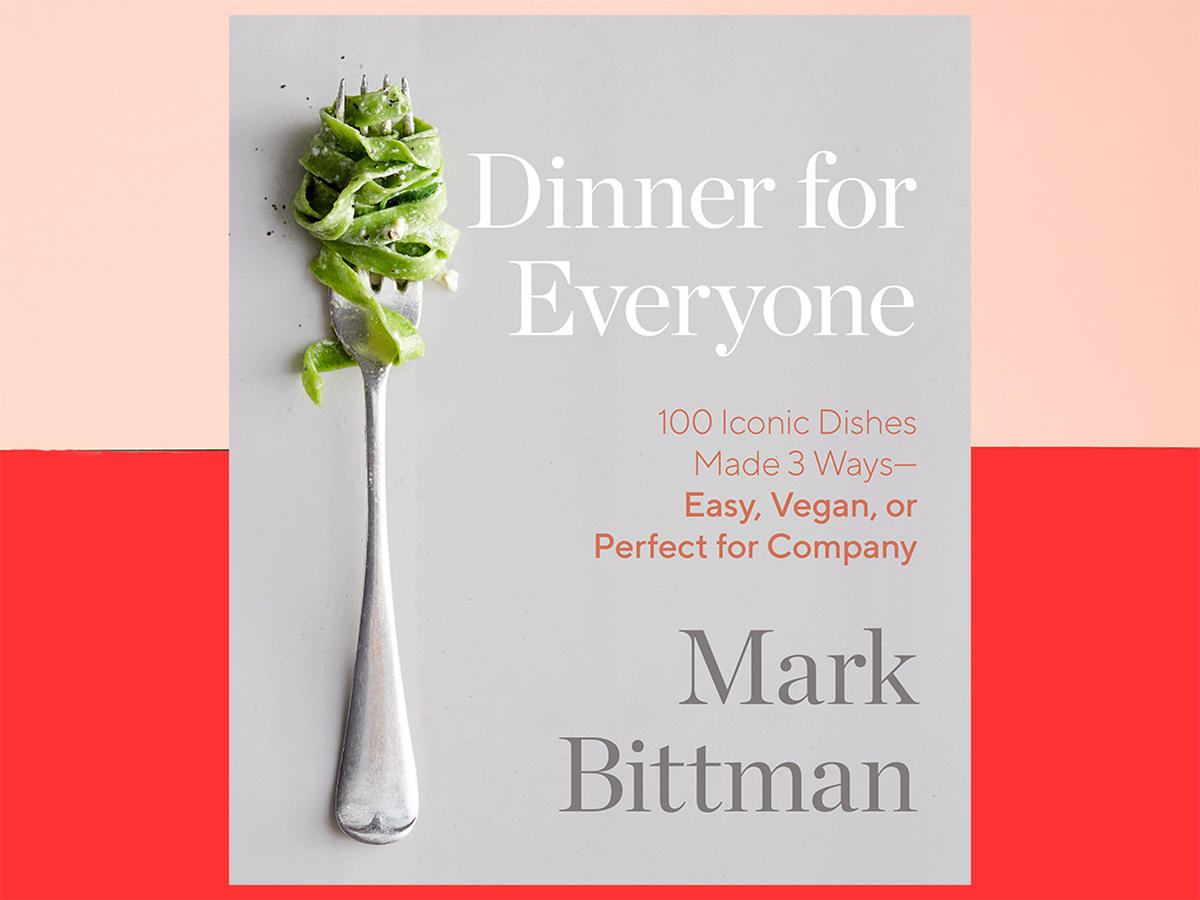 What goes onto the American dinner plate has radically changed over the the last few decades, something Mark Bittman knows all too well, as a celebrated cookbook author, columnist, and lecturer.

The best-selling author began writing cookbooks 25 years ago, is one of the biggest proponents of a plant-forward lifestyle, and says his latest work is a nod to the major cultural shift towards plant-based eating he has both witnessed and been a part of fostering.

In a nod to those often competing desires, the book serves up three variations on 100 different iconic dishes, from Caesar salad, to Thai curry, to a casseroles and pot pies. Helpfully color coded, and labeled “easy,” “vegan,” and “all out,” he offers a quick weeknight version, a plant-based vegan version, and a fancied-up version for celebrations, dinner parties, or just whenever you have the time and inclination to really cook something up right.

“The book went through a lot of iterations. It started out as a ‘good, better, best.’ But at the end of the day, we looked at it carefully and asked ourselves what people actually want that we can provide and that we can do well.” Bittman said, in a phone interview with Cooking Light. He settled on the final version because “everybody wants fast food, many people want to be able to cook something really special for their loved ones, and everyone knows we should be eating more plant-based.”

Though a lot of the dishes (sushi, paella, coq au vin) look pretty fancy, Bittman doesn’t want the book to be intimidating to new cooks.  “Everyone is complaining it’s hard to learn how to cook, so [I wanted] to do a bunch of simple fast, get-dinner-on-the-table recipes.”

Bittman said this book serves as a great introduction into really learning how to cook impressive-looking meals—most of them in 30 minutes or less.

And he’s made a simple, satisfying recipe for almost anything you might crave—be it curry, pizza, tacos, or even Korean barbecue.

Each dish Bittman has chosen has an actual vegan option—including a pot roast, schnitzel, and even a Sunday dinner. The reason why has a lot to do with Bittman’s beliefs and writings on prioritizing plant-based eating, even if you only do it (as he does) for part of the day.

Eating a more plant-based diet has been shown to offer major health benefits—from reduced chronic disease to increased longevity. And these benefits can be enjoyed even if you don’t give up meat entirely. Bittman knows going full-time vegan is a major commitment, and he wanted a way to help people learn how to cook “plant food” without having to commit to buying a strictly vegan cookbook.

“Take chicken salad: The idea was not to figure out how we can mimic it in the plant-based version. The idea was to understand what’s at the soul of chicken salad,” Bittman said. “We weren’t trying to use fake meat in stuff. We were trying to stay with the fundamental essence of the original dish and its flavors, rather than trying to mock the meat perspective.” The result? Alongside a 20-minute corn and miso chicken salad, and and all-out seared duck salad with hot, sweet, and sour dressing, there’s a recipe for “Everything-But-the-Chicken Salad,” which features jicama and raw sunflower seeds, alongside the traditional tarragon, celery, and onion.

As such, you won’t find any processed fake vegan meats or dairy alternatives here. Besides a handful of tofu and tempeh recipes, most of the vegan dishes focus on making vegetables, grains, and legumes the stars of a meal.

Not all vegan cookbooks are healthy, either—plenty offer high-calorie comfort foods that are free from animal products. Bittman says he made sure these vegan dishes were truly healthy and didn’t require expensive superfoods, either. The Crunchy Peanut Tacos recipe for instance, one of Bittman’s favorites, is made from canned tomatoes, fresh mushrooms, roasted peanuts, and other simple ingredients that can easily be found at any local supermarket.

The third (and possibly most fun) purpose of this book is to build your confidence to be able to not only cook for loved ones, but have some go-to, crowd-pleasing recipes in your arsenal to lean on when you do. Some of his show-stoppers include a lobster tortelloni in brown butter, a 2-hour classic bouillabaisse, and a prime rib with popovers and marrow au jus.

Bittman said he and his team have been working together for more than 10 years and won’t settle for something that’s not terrific. They spent three years developing the 300 recipes listed in this book—and every one of these dishes have been scrutinized (and approved) by Bittman and company.

“We believe cooking for family and friends is important from a social, psychological and a health perspective,” Bittman said. “[These recipes are] well-thought out, well-tested, and well-balanced. You want to put things together in a way that really makes sense, and I think we do that as well or better than anybody.”

Whether you’re entertaining a crowd of picky eaters or trying to impress refined palates, looking to dabble in plant-based eating, or simply trying to accomplish making a recipe that tastes like it’s supposed to, this book is for you.

Buy the Book: Dinner for Everyone