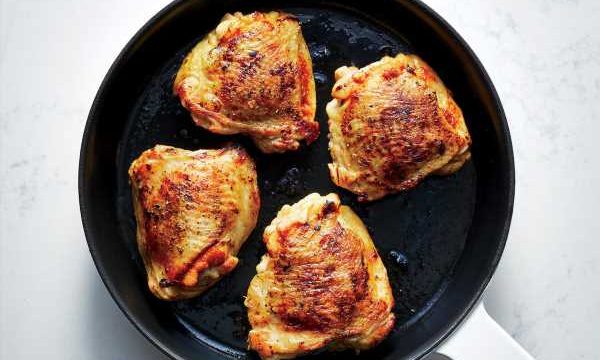 And it’s not just a small majority of die-hard chicken lovers skewing that number: 9 out of 10 people reported eating chicken six times in a two-week period, according to another survey.

We’re obviously eating a lot of a lot of this lean bird, which begs the question: is chicken healthy? Chicken’s popularity is, in part, thanks to the fact that it’s delicious and juicy and convenient (you can always find it at the grocery store). But chicken can also be good for you (I’m a dietitian nutritionist. I know this stuff.) Ounce-for-ounce it’s one of the leaner animal proteins you can choose. Research shows eating chicken (as part of a healthy diet, of course) helps with weight control, and lowers your risk of cardiovascular disease and diabetes.

Chicken also delivers some key minerals that we don’t always get in adequate amounts—potassium, magnesium, iron, and zinc—as well as important vitamins like a handful of the Bs (notably niacin, B6, and riboflavin). It also contains some omega-3s; although it doesn’t rank among the richest sources, it typically does have more EPA and DHA than beef, lamb, or pork.

What Is the Healthiest Cut of Chicken? When trying to lose weight, dieters often gravitate towards eating only chicken breasts since they’re leaner. But is there room in a healthy diet for other parts of the chicken? We crunched the nutrition numbers from the USDA to find out.

You know that phrase, “breast is best”? Well, it applies here, too. Chicken breast is the leanest and the highest in protein.

These juicier cuts also win for their iron and zinc contributions, as they offer about 50 percent more than breasts, and sometimes as much as the leaner cuts of red meat.

Like thighs, wings also deliver a nice hit of iron and zinc.

*Ahem, eating a skinless wing is a sin.

Nutritionally equal to chicken breasts, this cut wins the quick-cooking category. They’re also more foolproof if you’re trying to stick to a healthy portion—doling out a few tenders feels a little more indulgent than cutting a massive chicken breast in half, right?

**Because you can only find skin-on tenders among the unicorns.

Overall, the difference between cuts of chicken isn’t too significant, especially when you consider that chicken breasts are much larger than thighs, which are larger than tenders and wings, so an equal-weight comparison isn’t always practical. And all cuts are packed with satisfying protein and good-for-you nutrients. So pick up the cut you find to be the tastiest and simplest to cook. If you tend to buy organic chicken, there’s some research that shows an organic bird has slightly less fat (though that will, and the research even says this, make the meat less tender to eat). In the Cooking Light test kitchen, we find the organically raised poultry to be slightly smaller and so it makes sticking to a healthy portion size—especially when it comes to chicken breasts—easier.

The Verdict on Chicken Chicken gets our healthy stamp of approval, and deserves a rightful place in any omnivore's meal plan. Just make sure you’re eating it as part of a healthy diet (read: more chicken-topped salads, less fried chicken wings.)  And if you’re ready to start cooking with chicken, these Healthy Chicken Breast Recipes will get you inspired.