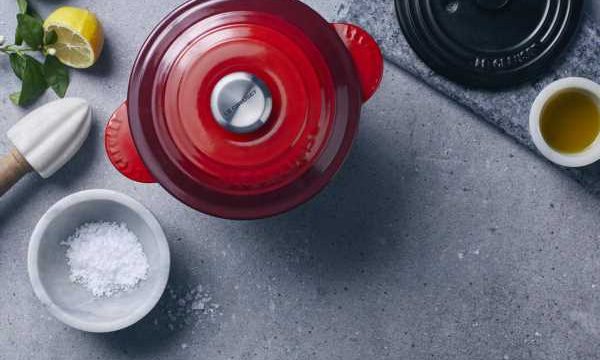 Le Creuset regularly launches new color lines for their hardy, much-coveted-on-wedding-registries cookware, but it's relatively rare that they introduce a totally new pot as part of their semi-regular updates. So when I heard that starting this month, Le Creuset is selling a two-and-a-half-quart cast iron rice pot as a new addtion to their line, I was intrigued, if a bit skeptical. No insult to the brand intended—I have a Le Creuset Dutch oven and use it often, and their pie dish is one of my go-to wedding presents—but I bought an electric rice cooker in college and never looked back. Could this cute little French oven really replicate the convenience and fret-free preparation of the handy little plug-in?

So, I decided to put it to a test. I called in a sample of the rice pot and tried it up against my home electric rice cooker, a slightly older version of this 8-cup wonder. The Le Creuset pot looks like a smaller, taller version of their French Oven, but with one difference: It also comes with a stoneware insert that fits under the lid, designed to prevent boil-overs while trapping in enough moisture to cook the grains properly. To use the pot, you put your desired amount of rice and water into the pot, bring it to a boil, and then cover it with the insert and the lid. Simmer for ten minutes, then turn off the stove and allow the steam to finish cooking the rice.

The same thing happened with brown rice, even though my rice cooker has a setting specifically for brown rice, which often takes much longer to cook. The Le Creuset cooked rice in roughly half the time as my rice cooker, and turned out rice that was more evenly cooked. I suspect it has something to do with the heat source, as well as the smaller capacity of the Le Creuset rice pot. Less water boils faster, after all, and the flame on my gas range heats up the pot more quickly than the heating element in my rice cooker. The only test that the Le Creuset took about as long as the rice cooker on was the farro, but the grain still turned out perfectly fluffy and a little chewy. What's more, in the days I had the little Le Creuset pot at home for my testing, I found myself reaching for it again and again because it's just a nice size and shape for a bunch of applications—cooking a single serving of pasta, reheating soup, or warming through leftovers that are prone to cold spots in the microwave. Like all Le Creuset pots, it looks great, and it's a pleasure to use.

But does it have some drawbacks? It does. For one, my rice cooker cost me something like $20. The Le Creuset Rice Pot runs $220. That's comparable to the smaller Staub Rice Pot, which goes for $210. But it's still steep. You also can't leave the Le Creuset pot unattended in the same way you can set a rice cooker and forget it until it beeps to inform you that your rice is ready. But if you've been looking for something that functions as well as a Le Creuset Dutch or French oven, but has a smaller capacity, and it's in your budget, this rice pot is absolutely worth your time.