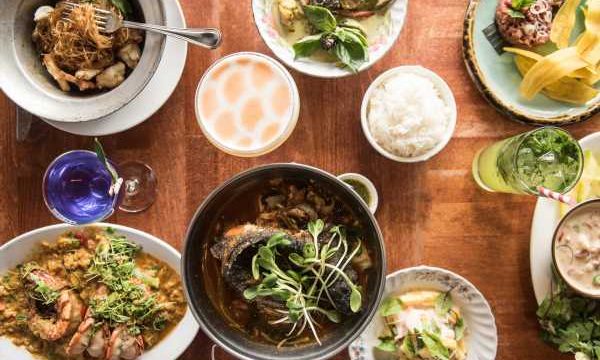 If you love Thai food but haven't ever attempted it at home, it might seem dauntingly complex. The layering of sweet, salty, spicy and sour in Thai dishes is a thing of beauty, but it's not something that's out of reach for a home cook. Though, like all cuisines, familiarity with Thai flavors and the methods for building specific dishes takes time and practice—and it helps a lot if you have the right ingredients on hand. Just ask Chef Ohm Suansilphong, co-founder of Manhattan restaurant Fish Cheeks, a self-described "Pad Thai free zone" where Suansilphong, his brother and co-chef Chat, and his team serve up family-style Thai seafood.

Part of the aim of Fish Cheeks is to introduce the restaurant's clientele to the kinds of Thai flavors that the Suansilphongs grew up with in the northern province of Sukothai. That meant shifting the focus from Americanized Thai food, like the aforementioned Pad Thai, to dishes like Coconut Crab Curry, Grilled Pork Cheeks, and Tiger Prawn Karee. But no matter if you're trying to recreate Northern Thai dishes off the Fish Cheeks menu, or making your own version of Pad See Ew or Tom Yum, there are several pantry staples that make putting together Thai dishes much easier. And while there are plenty of other essentials in Thai cooking that are worth having around—makrut lime, bird's eye chilis, lemongrass, and Thai basil, to name just a few—these are the basics you should absolutely scoop up the next time you're at a grocery store with a large selection of Thai items to have on hand.

Fish sauce is a major component of Thai cuisine. It's how you get that signature saltiness in many dishes. You can pick up a bottle of it to have on hand the next time you want to make Thai noodles at home. Chef Suansiphong prefers either Red Boat Fish Sauce or MegaChef.

Palm sugar looks pretty similar to brown sugar, but the taste is subtly different—it has a slightly more caramelized note in the background, maybe a hint of something like coconut or maple. You can buy it in a jar or patty, and should keep either form in your pantry until you want to use them. "The ingredients you use for most dishes are so simple, it makes sense to invest in them," Chef Suansiphong says.

Once you taste Golden Mountain Sauce by itself, you'll likely recognize the rich, umami, salty notes from your favorite Thai meal. It's often referred to as just "Seasoning sauce" in Thai recipes, that's how ubiquitous it is. It's similar to maggi sauce, or like soy sauce with extra oomph.

This ingredient is made of dried, fermented shrimp and the resulting funky, salty flavor of shrimp paste is hard to replicate. You'll find it useful in everything from green papaya salad to coconut noodles.

If you have room in your cart and you see it, it's probably also good to grab tamarind paste for the sour-sweet flavor it imparts in many Thai dishes, as well as galangal root—or in a pinch, galangal powder—for the next time inspiration strikes.