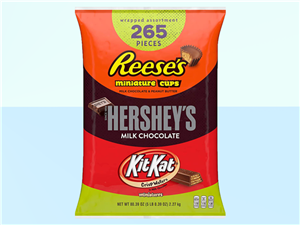 2020 hasn’t been a great year for most of the world, but don’t tell that to Jeff Bezos. The Amazon founder’s net worth has increased significantly since the pandemic locked everyone inside for months, crossing the $200 billion threshold back in August. Great for him.

If you’re reading this, I can almost guarantee you’re not a billionaire, but that doesn’t mean you can’t at least feel like a million bucks when you shop on Prime Day. While Amazon’s delayed “holiday” (usually held in July) gives you a chance to score deals on air fryers, OLED TV’s, and other things you probably don’t need, it also offers a chance to save on essentials, like, say, a giant five pound bag of variety bag of Halloween candy.

That’s exactly what you’ll find on the mega retail conglomerate if you act right now. For those with a prime membership, it’s possible to get your sticky fingers on a bulk bag of Hershey’s, Kit Kats, and Reese’s candy for just $18.17. Packaged as miniature versions of the three old favorites, the five pound bag contains 265 individually wrapped pieces. Doing some quick math, that breaks down to either $3.63 per pound or less than seven cents per piece of candy. That’s like eight pieces of candy for the price of one stamp.

WATCH: These Are the Most Useful Pampered Chef Tools of All Time

This is far from the only candy deal one would find on Amazon, given their mission to dominate the market for global commerce by selling essentially anything you could imagine. If you’d rather have both a physically bigger and wider variety of Reese’s candies, that’s also an option. Conversely, you can support a relatively smaller business by picking up a three-pound jar of Reese’s Pieces from Costco.

With early evidence suggesting there will be fewer trick or treaters prowling the streets this Halloween, buying this one big ol’ bag will probably cover your bases on October 31st with plenty left over. So screw the new TV. If you’re going to give Amazon your money, at least buy some chocolate.