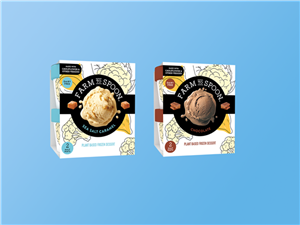 Vegan ice cream is more accessible than ever. And whether you’re looking at it from an ethical, nutritional, or just plain curious standpoint, that’s a very good thing. Everyone deserves ice cream, no matter which diet they follow.

However, accessibility doesn’t always equate to an incredible flavor experience, and as a regular ‘ol omnivore, taste matters to me. So when a colleague in our test kitchen told me about some outstanding vegan ice cream (that’s made with vegetables, no less) she recently tried, I was intrigued.

It’s called Farm to Spoon, and she found it at Publix. So we procured every flavor and gave this vegan ice cream an open-minded try. Much of the vegan ice cream we’ve tried has a coconut base, while others use oat milk. Sometimes non-dairy ice cream is great; other times, it's downright disappointing. Farm to Spoon’s ice cream is primarily made of cauliflower, which sounds bizarre, but seemingly yields an impressively smooth texture without much of an aftertaste. Other ingredients include sweet potatoes, navy beans, coconut oil, rice flour, and cashew butter, depending on which flavor you get.

Just to clear things up, this isn’t a diet ice cream. If you’re looking for something low-calorie, try, I don’t know, Halo Top. Farm to Spoon isn’t health food, it’s simply vegan ice cream that doesn’t taste like a punishment. This one tastes like a standard chocolate ice cream. For those of us who prefer a rich, fudgy dark chocolate flavor, this wasn’t quite enough. But one thing’s for sure: Nobody detected vegetables or a lack of dairy. This flavor was a little too sweet for some of us, but the cookie dough bites, which were made with rice flour, tasted like the real thing. The vegan chocolate chips, however, were not quite as close, and left a bit of an aftertaste. This flavor had mixed reviews: It wasn’t as sweet as the others, and one taster called it savory, which made the vegetables a little easier to detect. Another taster, however, applauded the lack of sweetness. So, if you’re not traditionally a “sweets person,” this may be worth a try.

Most of us were quite impressed with this flavor, which completely obscured any hint of vegetable presence. For a few tasters, it was a bit too sweet—as a caramel flavored ice cream is apt to be. However, everyone agreed that the texture was delightfully rich and creamy.

Thyme in a Bottle

McDonald’s vegan burger: Where to buy the exclusive new menu item – how much does it cost?

Lantana Cafe: A taste of Australia that brings a slice of sunshine to the UK