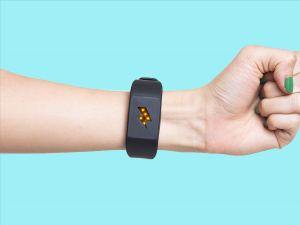 It’s not always easy to fix a bad habit. Even with an immense amount of willpower, our reptilian brains have a way of tricking us into engaging in “rewarding” behaviors like pigging out on fast food. So how are we to change for the better?

Apparently, the answer to that question is “buy a shock bracelet off of Amazon.” Or at least that’s what the inventor of Pavlok wants you to think. Looking pretty similar to a Fitbit and functioning like an electric fence collar you’d force a dog to wear, the Pavlok is capable of delivering 350 volts of electricity to the wearer in order to curb their "bad" behavior.

As psychology 101 students might have gathered from its name, the Pavlok draws on the concept of Pavlovian conditioning, encouraging users to associate the habit they want to cut out of their life. Inventor Maneesh Sethi described the shock to ABC News as feeling like “if you were to touch a doorknob after rubbing your socks on the carpet.”

The Pavlok apparently holds 150 shocks per charge, which means you might have to charge it pretty often or not at all, depending on the habit you’re trying to correct. You can choose to shock yourself, or hand over controls to a trusted friend or family member via a connected app that can send the shocks remotely.

Perhaps that’s what might be the Pavlok’s design flaw: users have to want to shock themselves. There’s no way to set up an electric fence around your local Wendy’s, so it’s on you to punish yourself in a sort of bizarre twist on the Stanley Milgram experiment.

If you’re a sadomasochist looking to eat healthier, stop smoking, or just general improve your life in a way that’s designed to inflict pain, you can pay $199.99 for the privilege on Amazon. You can also pay a little extra for a special pink, blue, or silver band for your Pavlok if you want to shock yourself in style. And if your friend is being coy about their new “Fitbit” but seems legitimately frightened every time you mention fast food, now you at least know what’s going on.