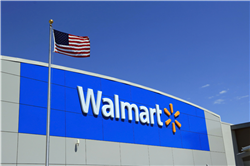 Update, August 18, 2020 2:06 p.m.: We’ve been patently waiting on the possibility of Walmart+ for the past few months, especially as more people turn to grocery delivery, so the buzz for the service has only gotten bigger. Thankfully, we know just a little bit more about it as of this week.
Walmart CEO Doug McMillon acknowledged it a bit on the company’s earnings call this week, saying “there has been a lot of buzz recently about membership at Walmart,” and that they’ve been testing out membership and unlimited delivery models. Though he didn’t name Walmart+ explicitly, he did say they would be announcing a new membership program.
“We think that assortment breadth and our ability to deliver with speed nationally, combined with a few other benefits for customers, will result in a compelling proposition,” he said: “So, we’ve been moving towards a new membership launch. We’ll share more about that membership and timing when it’s appropriate.”
No details about launch timing were shared but if you google the service a page comes up saying “Walmart+ is almost here,” so I am letting myself get excited. McMillon also said that the membership model will go beyond simply grocery delivery “so that it’s really more of a membership and a relationship.”
“…I think, is the customer is ultimately in charge. We are going to be flexible. We’re going to have multiple ways to serve them, and those families will decide in that moment how they want to shop,” he continued.
Original, March 2, 2020 1:44 p.m.: Everyone is super busy these days, which is part of the reason why services like Amazon Prime have done so well. You just pick what you need online, and it’s delivered to your doorstep in a day or so—easy peasy. Apparently Walmart wants in on a piece of the action, because the company is reportedly working on something called Walmart+ that will deliver groceries to your door on the cheap.
Sources told Vox’s Recode that Walmart+ is essentially a relaunch of the $98-a-year InHome Delivery, a same-day grocery service that Walmart launched last year. As of now, the service is only available in certain areas and allows subscribers to skip the per-delivery fee for grocery deliveries.
Unlike the existing service, Recode says that Walmart+ will have unspecified additional perks. The perks could include things like discounts on gas or prescription drugs. It may also include tools that make ordering and checking out more convenient.
There’s a lot about this that’s super vague right now, including price (sources say it could change from the current $98 or be offered at different price tiers). It’s also unclear how Walmart plans to set themselves apart from other grocery delivery services like Instacart. But, you know, people do love a good discount service.
Sound like something you’d be into? Recode says that Walmart+ could be launched as early as next month. We reached out to Walmart for comment and a Walmart spokesperson confirmed “the creation of a membership program and its name – Walmart +” but could not confirm any other details at this time. We’ll be sure to update this post if we hear more.
Source: Read Full Article