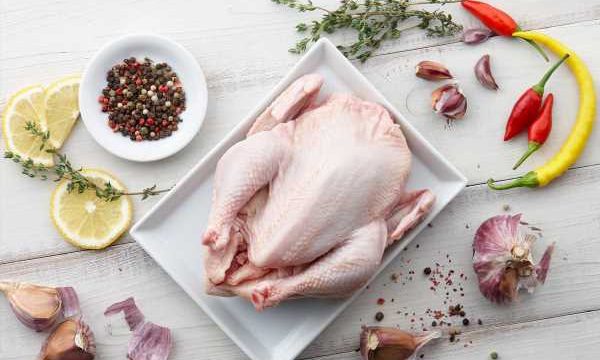 The benefits (or non-benefits) of washing raw chicken before cooking have been debated for decades. In fact, on an episode of Julia & Jacques Cooking At Home, Julia Child famously argued with her co-host, Jacques Pépin, saying that you need to wash chicken before roasting it—Pépin believed it wasn’t necessary, and that the oven’s heat “kills all the germs.” In 2018, Ina Garten joined team Pépin and also said there was no need to wash a chicken before placing it in the oven—as it turns out, the U.S. Department of Agriculture (USDA) is on their side, too. On August 20, the department released study findings showing that washing or rinsing raw poultry actually puts you at risk of illness.

“Even when consumers think they are effectively cleaning after washing poultry, this study shows that bacteria can easily spread to other surfaces and foods,” Dr. Mindy Brashears, the USDA’s Deputy Under Secretary for Food Safety, said in the report. “The best practice is not to wash poultry.”

In order to help prevent illness when you’re preparing poultry (as well as other meat) at home, the USDA has three recommendations. First, that you prepare food that won’t be cooked (such as salad), before working with the raw meat—statistics show that 26 percent of study participants that washed raw poultry transferred bacteria to their salad lettuce, and 60 percent had bacteria in their sink after washing or rinsing said poultry. (Even after trying to clean the sink, 14 percent still had bacteria remaining.) Then, it’s important to clean any surface that has touched the raw poultry and/or its juices—the combination of hot, soapy water and a sanitizer is best, according to the USDA. Also crucial? Wash your hands and any utensils/tools that touched the poultry, too. (Clean your hands immediately after handling, scrubbing for 20 seconds.)

The third tip from the USDA is to ensure that meat and poultry are cooked to a “safe internal temperature,” which you can measure with a food thermometer. Poultry (whole or ground) is safe to eat at 165 degrees Fahrenheit; ground meats (aka burgers) are safe at 160; and beef, pork, lamb, and veal are safe to eat at 145. While you might be tempted to wash or brine your meat in saltwater, vinegar, or lemon juice, the USDA warns that that won’t destroy bacteria, either. Your best bet is to keep the surfaces around you clean, and make sure your meat is fully cooked.

We also have a guide from chefs detailing nine common mistakes to avoid when cooking chicken—believe it or not, it’s actually much harder to cook than steak. However, if you remember to dry your meat in the fridge, brine it, and let it rest after cooking, you’re well on your way to a perfectly cooked piece of chicken. Check out the rest of the tips in our roundup.