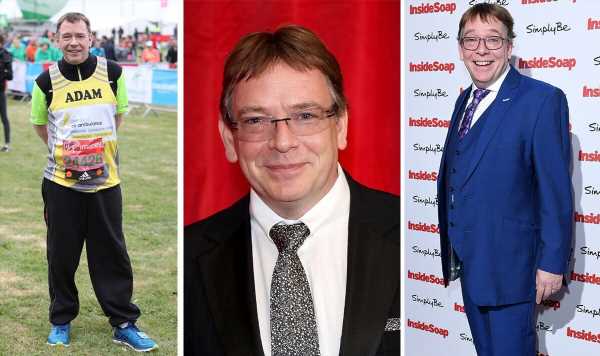 EastEnders: Ian Beale cries at the station as he leaves Walford

Adam Woodyatt, 53, has left fans seriously impressed with his weight loss success over the years. The EastEnders’ icon kick-started his new, healthier lifestyle and dropped a whopping three stone in the process.

But how did he do it?

Adam has become a household name over the years, best known for playing his character Ian Beale on the BBC soap since 1985 up until his departure last year.

But there has been a dramatic change in his appearance throughout his run on the popular show, and not just in age, but weight loss too.

Not long ago, the actor shared that his decision to ditch booze and now consumes nothing stronger than coffee.

This, on top of him being a keen mountain biker, saw the weight fall off.

And he has found he is now “more active” on his bike compared to before giving drink the boot.

Speaking to The Mirror, he said: “I had always liked cycling but as anybody who cycles knows, it’s a lot easier if you are lighter.

“People will spend hundreds of pounds on shaving 10 grams off of equipment, like lighter pedals.”

But he credit giving up alcohol as the main solution.

“Basically I gave up alcohol. That was the biggest change I made,” he said.

And he hasn’t looked back since.

“That’s all it was. I’m just not really focused on it,” Adam beamed.

“I’ve not really made a big fuss about it. I just stopped drinking.”

It’s a well know fact that a person can lose weight when they cut alcohol out of their diet, especially if they tend to binge on a semi-regular basis.

Alcohol is full of hidden calories, which all add up to a person’s daily tally.

While Adam revealed he didn’t struggle with giving up drinking, he acknowledged “everyone’s different”.

“For me, giving up alcohol was the right thing to do,” he said.

“I’m not going to turn around and say that’s it forever, that I’m never ever going to drink again.

“But at this point in my life, I’m quite happy not drinking. And the result is I’ve lost about three stone in weight.”