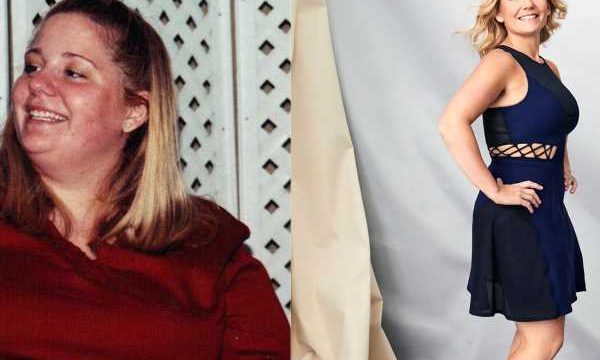 Sara Cloutier is ready for her third pregnancy. After gaining a lot of weight — topping out at 301 lbs. — with her first pregnancy, and experiencing a much healthier pregnancy with her second child — gaining just 40 lbs. — she’s determined now to maintain the level of health and fitness she’s made her lifestyle.

Growing up, Sara Cloutier always felt like an outsider. Weighing around 220 lbs. in high school, she was heavier than all her friends, and was too embarrassed to go shopping or play sports with them.

“I cannot remember a time when I didn’t feel like I was the biggest girl in the group, and I hated it,” Cloutier, 36, told People. “I was always the odd one out.”

After college, Cloutier became pregnant, and felt like it was an excuse to eat whatever she wanted.

“I could barely move at that point,” she says. “I didn’t fit into any of my clothes. It was crazy. I just couldn’t do it anymore. I didn’t want to die. I wanted to watch her grow up and raise her and give her healthy habits.” Cloutier’s parents helped her get started with a personal trainer, and she made small dietary changes like swapping soda for water and picking healthier meals

She admits that the first week — which mostly consisted of walking on the treadmill was “hell.” But she had immediate results, and when Cloutier met her husband at age 26, she had lost about 100 lbs. They had a “whirlwind” romance, and got engaged after a few weeks, and while she was happily in love and planning her wedding, the rest of the weight came off, for a total loss of 150 lbs. Then, in 2007, she got pregnant with her second daughter.

“When I got pregnant I was terrified, to the point where I had to get guidance from the doctor because I wasn’t eating enough,” Cloutier says. “I was like, I can’t eat more, I don’t want to get that heavy again.”

She learned that gaining some weight was entirely normal and necessary, and Cloutier ate well and stayed active throughout the nine months. She ended up gaining a healthy 40 lbs. — a far cry from her first pregnancy, where she gained 85 lbs.

“The delivery was a night and day difference between the two girls. It was 10 minutes of labor versus two days. It was just so obvious how much better it was to be healthy, for me and my baby.” After her second daughter was born, Cloutier eased back into her workouts, and discovered Zumba classes. She immediately fell in love with it, and got certified to teach just three weeks later.

“Soon I was teaching seven days a week,” she says. “I was renting function halls and libraries and school gyms, and the classes were huge, 50 people a night.”

By 2013, the demand had gotten so big that Cloutier opened her own fitness studio, with multiple instructors, and she continues to run it while also maintaining her full-time job as a program manager for a security company.

If her days aren’t busy enough, they’re about to get crazier — Cloutier learned in November that she’s pregnant with her third child. But after her first two pregnancies, she’s ready for this one.

“I’d be lying if I said I wasn’t concerned about gaining the weight back, because gaining weight is still scary, and having to purposely do it is scary,” she says. “But knowing the difference between a healthy pregnancy and an unhealthy pregnancy is huge.”

Have you lost half your size? Send us your story at [email protected].