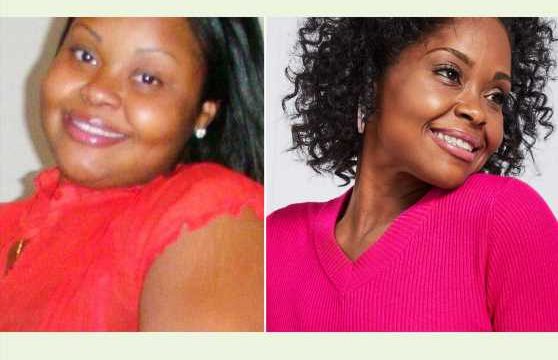 Growing up as the “baby” of her family, Kisha Reid always got — and ate — whatever she wanted.

“I overate all the time,” Reid, now 36, told People for the 2019 Half Their Size issue. “Food was just a big part of my family. My heritage is Caribbean, and it’s all about the rice and the meat and greasy foods that are good, but not good for you.”

She remembers being a senior in high school and going with friends to the Miami Dade County Fair, only to have the trip end in embarrassment after one of the ride guardrails wouldn’t lock over her body. But her unhealthy habits continued, and Reid hit her highest weight at age 22 after giving birth to her son.

“I started putting on a lot of weight during those first six months of his life because I wasn’t really going out or doing anything,” she says. “I was just home taking care of him and eating.” In those days, Reid would eat giant breakfasts each morning of eggs, toast, pancakes and bacon, and plenty of processed foods at lunch. She also loved going to fast food restaurants, and would order loaded nachos, tacos, cinnamon twists and a “big jug” of raspberry iced tea, all in one meal.

After reaching 298 lbs. that year, Reid decided that she had to make a change for her son.

“I didn’t want to be that parent that couldn’t run and take their child to the park and play, and I just couldn’t see myself being that way,” she says. “And it scared me, it really did. Because it was that way when I was growing up. I couldn’t be active as a child, and then as an adult I didn’t want to go even further where I couldn’t even play and be active with my child.”

At her aunt’s suggestion, Reid joined a diet program in 2006 that taught her proper portion sizes, and how to track of everything she ate.

“The weight came off slowly, but it came off, and I was still able to enjoy all the same foods that I love,” she says. “It was like a win-win. So I stuck with it, even though it was a process. It came off slowly, and I hit plateaus, but I never put any of the weight back on because I just had that control.”

Ready to get healthy? Start here, with the Cooking Light Diet.

After ten years on the program and daily walks outside, Reid had lost 100 lbs., but she wanted to “step it up a notch.” She started researching vegan diets and slowly transitioned animal products out of her diet three years ago, plus she began working out at a gym and now does intermittent fasting. “I feel so much lighter, so much more alive,” Reid says of eating vegan. “I love food so much more now, and I don’t need to put a lot of stuff on it to increase the flavors. I could literally sit and eat a whole bell pepper and it would be the most delicious thing ever.”

Now another 53 lbs. down, she’s also teaching her now-14-year-old son about eating plant-based foods, though she knows he still enjoys meat.

“Hopefully when he gets older he’ll say, ‘Oh, my mom was right about that. Maybe I should eat more of this,’ ” she says with a laugh.

Have you lost half your size? Share your story with PEOPLE at [email protected]!