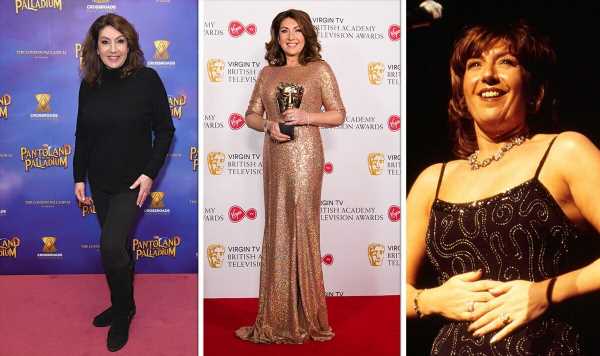 Jane McDonald jokes about her 'wet backside' in Florida

Jane McDonald is a familiar face on British TV screens, having hosted a variety of documentaries in recent months. The 58-year-old has a fantastic figure which she maintains by eating a healthy diet and doing regular exercise. How did she lose weight in the first place?

After starting her career as a cruise ship performer, Jane rocketed to fame when she first appeared on BBC One’s docusoap The Cruise.

The cruise industry can be gruelling, and Jane noticed she had gradually piled on the pounds.

Unhappy with her body, Jane decided to embark on an impressive weight loss journey in 2015.

The singer lost a whopping four stone and dropped to a tiny size eight.

Jane has managed to sustain her figure since, crediting her diet for helping her to do so.

The presenter cut foods from her diet, including sugar.

Her main motivator behind eradicating sugar was her stint on ITV’s Sugar Free Farm.

Jane and other famous figures participated in an educational bootcamp which saw them avoid sugar in a bid to improve their health.

Jane lost around 9lbs – or more than half a stone – in just a few weeks.

The 58-year-old said she lost weight “because of a change in my mindset”.

Jane continued to follow a sugar-free diet after the show ended and, consequently, lost an impressive four stone.

“I went on Sugar Free Farm for ITV, and I didn’t think I was overweight when I went in there, but I changed my diet.

“I just feel so much better. I’ve got so much more energy.

“I look different and I feel fantastic, and that’s just by cutting out sugar from my diet.”

To avoid her weight creeping back, Jane makes sure to “cut down” on food when on board a cruise ship.

Jane went on to say she “eats a lot of salads” and she has also cut out “white carbs, like white flour or white pasta” from her diet.

She doesn’t “eat crisps” and likes to start the day “with a green smoothie”.