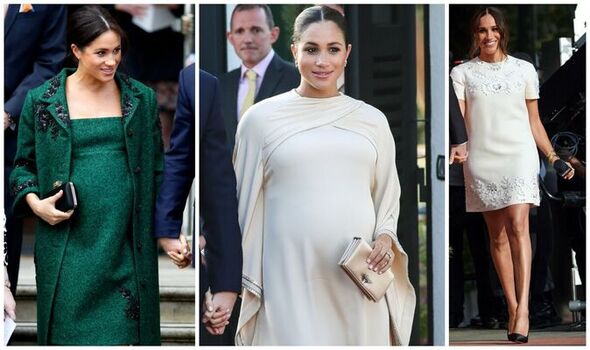 Meghan Markle, 41, has had two children, Archie, three, and Lilibet, one, but managed to achieve healthy weight loss and look slim again with her fantastic figure. Both times after giving birth, the Duchess of Sussex was able to get her thin physique back to normal.

Before Meghan shut down The Tig in April 2017 before announcing her engagement to Prince Harry, she described herself as: “Someone who not only loves but also appreciates the art and skill that goes into making good food.”

Behavioural expert Darren Stanton spoke to Express.co.uk about the Duke and Duchess of Sussex’s diets out in America.

Darren said: “In recent years, it’s reported Harry has ditched junk food, including pizza, and is now embracing the Californian lifestyle by eating healthier foods, like plenty of fruit, and sipping on green smoothies.

“Meghan, meanwhile, dines on pasta and plenty of parmesan cheese, especially homemade dishes she can conjure up herself in the kitchen.

“The recipes of which, she previously shared on her blog.” Meghan’s recipes include her tomato crustades, smoked salmon dill dip, poached pears in spiced orange juice, and coconut Thai curry.

Darren added: “Meghan seems quite adventurous and she displays this during the time she spends in the kitchen.

“She’s passionate about creating and trying out different meals. This shows she is open to new opportunities and change,” the expert noted.

According to the behavioural expert, Meghan tends to go for two diet options during the week.

Darren claimed: “Conscious of the food she eats and wanting to adopt a healthier lifestyle, like many in California, it’s said Meghan eats both vegan and gluten-free meals during the week.

“At the weekend, she’s happy to push the boat out and indulge in things she would usually avoid [claims suggest].”

The Duchess previously admitted this in 2015, saying: “I try to eat vegan during the week and then have a little bit more flexibility with what I dig into on the weekends.”

Darren added: “This ability to relax typical habits demonstrates her ability to be flexible and have fun while still maintaining discipline.

“This idea lends itself to her personality where Meghan has a sense of seriousness about her, but at the same time is not afraid to let her hair down.

“We see snippets of this when she is pictured laughing and joking alongside Harry.”

Darren noted: “Harry’s change in diet could be indicative of Meghan’s influence on him within their relationship to be more adventurous.

“Despite moving Stateside, however, Harry still longs for a touch of tradition.

“He is said to love a Sunday roast, with him and Meghan admitting to cooking a roasted chicken together.

“A typically British dish, not only is this reflective of a home connection he still holds dear, suggesting he misses parts of his life back in the UK. But it also signifies how Harry chases feelings of nostalgia too.”