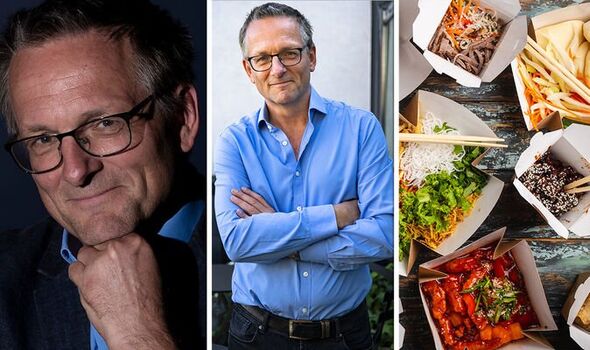 Dr Mosley explained there is an “obesity crisis” in the UK as the country is the second in Europe with the highest obesity rates. But how can Britain tackle the problem?

Michael Mosley claimed GPs should approach the issue differently as he shared his own weight loss journey.

Dr Mosley explained: “10 years ago I was told I had type 2 diabetes.

“My doctor wanted me to start on medication, but I discovered independently that if I could lose 10kg (1.5 stone) then I could get rid of the disease.

He continued: “I think we have to shift resources within the NHS.

“Have less services on treating diseases caused by obesity and more treating obesity itself.”

Michael Mosley claimed the obesity problem in the UK is mainly caused by fast-food chains, supermarket promotions and deals and food delivery apps.

He explained that fast food shops are a major problem, especially in the most deprived areas of the country which have “disproportionate rates of fast food consumption”.

“They are cheap and part of the community,” he said.

“These have gone from being an occasional treat to something many people eat every day and that is very worrying.”

In terms of supermarkets, “price promotions tempt us to spend,” Dr Mosley explained.

“We purchase 20 percent more than we intended” and according to the broadcaster, nearly half of promotions are foods that have high levels of sugar, salt or fat.

Delivery apps are also growing at an “astonishing rate,” he explained.

“Sometimes it can get addictive, I kind of have to fight with my demons and say that is enough. It’s very hard to say no,” he said.

Michael Mosley explained: “We don’t know the impact on the waistline yet but it’s bound to be bad.

“Bear in mind next time you order takeaway you will consume twice as many calories as if you cooked it at home.”

The broadcaster and doctor advised Britons to watch what they eat as “using delivery apps could change your eating habits” and impact one’s health.