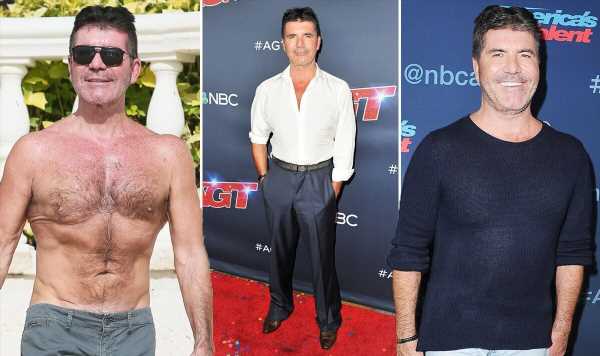 Lorraine urges Simon Cowell to wear a helmet whilst cycling

Simon Cowell has been a regular on the small screen for many years and most recently he has appeared as a judge on Britain’s Got Talent. Eagle eyed fans may have noticed his weight loss in the last few years.

Simon has lost anything between one stone and three stone, according to reports.

He first made a change to his diet following a health scare in 2017.

The music mogul was hospitalised with low blood sugar and consulted a weight loss professional.

Simon has said he was recommended to cut out foods including red meat, dairy, sugar, bread and gluten.

He decided to switch to the plan and claimed he has stayed on track.

“I did see a doctor in Harley Street,” Simon began.

“He sent me a list of things I can’t eat, and that included red meat, dairy, sugar and gluten.

“And I pretty much stuck to it.”

Diet and exercise both play a part for those hoping to slim down.

There are many diet plans on the market and slimmers can consult a doctor to find the best plan for them.

Simon is said to start the day with a green smoothie and no-sugar Alpen.

For lunch, the 62-year-old tucks into soup and grilled tomatoes.

He also shared his love of a British staple – beans on toast.

“Sometimes when we are going out for dinner because I know I’m going to hate the food, I have baked beans on toast before I go, then eat nothing,” he told The Sun.

He also credited drinking lots of water as part of his weight loss secrets.

In terms of exercise, Simon is said to enjoy cycling and staying fit on the bike.

The BGT judge reportedly has a collection of 15 bikes at his home.

Cycling can get the heartrate up and burn a high number of calories.

A Harvard University study looked into the calorie burning effects of using a stationary bike.

It found that a person weighing 11st 1lb could burn around 260 calories in 30 minutes.

This is if the person is cycling at a moderate pace.