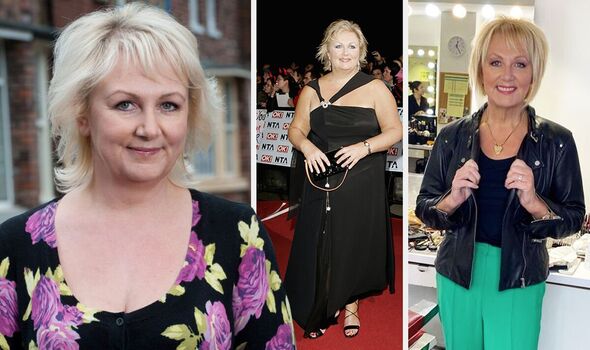 Sue Cleaver has signed up for the 2022 series of I’m A Celebrity…Get Me Out Of Here! where she and several other famous faces will take part in a series of challenging tasks. One of the hardest things about the show is the limited amount of food and overwhelming hunger, which results in many celebrities losing weight. Sue previously lost three stone by following the Mediterranean diet.

The Coronation Street actress’ weight loss journey began in 2016 and she went from a UK size 16 to a size 12.

Sue, who is a “self-confessed foodie” revealed, “over-indulgence was her Achilles Heel”.

But “everything changed” when she reached her mid-50s, an unnamed source told Woman magazine.

“It was a no-brainer that cutting down on certain things was what she had to do,” they explained.

“She’s in this for the long game and wants to live a long, happy and healthy life” and that means “losing weight and keeping it off”.

When considering how to go about losing weight, Sue decided to follow the Mediterranean diet – one of the most popular diets in the world.

The diet, that weight loss expert Dr Michael Mosley recommends, encourages an eating pattern that includes the food staples of people who live in the countries around the Mediterranean Sea, such as Spain, Greece, Italy and France.

It also focuses on community when eating – meals with family and friends, and enjoyable conversation.

As for what Sue could eat during her weight loss journey, the diet is rich in fruits, vegetables, whole grains, seafood, nuts and legumes and olive oil.

Another reason so many people love the Mediterranean diet is the allowance of low to moderate amounts of red wine, and moderate means one small glass each day.

No food is banned as such, but the Mediterranean diet encourages limited foods such as red meat and sugary processed foods.

Poultry, eggs, cheese and yoghurts are to be eaten moderately too.

Sue won’t be able to follow the Mediterranean diet whilst taking part in I’m A Celebrity, instead, she will be eating a gruelling diet of rice and beans.

It has been widely reported that celebs eat around 700 calories a day in rations unless they win stars in the daily tasks.

Those stars equate to the evening meal, and the number represents how many portions the camp will be given.

The food available to celebrities has been “carefully worked out by nutritionists” a source told The Sun.

Celebs are also allowed to win treats in the Dingo Dollar challenge – sometimes it might only be a biscuit per person though.

Despite the gruelling diet, there is a team of healthcare professionals monitoring the celebrities the whole time.

But, inevitably, many lose weight due to the limited number of calories they consume.