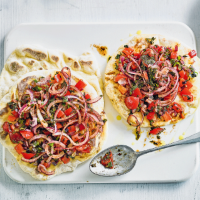 1. Place the flatbread ingredients into the bowl of a food processor and pulse until the mixture forms a ball. (If you don’t have a food processor, this can be done in a bowl using a fork to begin with, followed by your hands, but it will take a little longer.) Dust a clean work surface with flour and tip out the dough. Knead for 1 minute to bring it together. Place into a flour-dusted bowl and cover with a plate. Put to one side to rest for 10-15 minutes.

2. To make the topping, warm a frying pan over a medium heat with 1 tbsp oil. Cook the onions and peppers for 10 minutes, until soft and sweet, then add the chilli flakes. Add the green chilli and mint to the pan along with the remaining oil. Stir, then take off the heat and season.

3. Next, make the salad. Finely slice the onion and put it into a bowl with the juice of half the lemon and a pinch of salt. Scrunch with your hands, then set aside for 5 minutes to pickle. Meanwhile, chop the tomatoes roughly, then put into a bowl with the herbs, spices and pomegranate molasses. Add the pickled red onions. Season and add a little more lemon juice and olive oil to taste.

4. Warm a large griddle or frying pan over a medium heat. Dust a clean surface and rolling pin with flour, then divide the dough into four equal pieces. Using your hands, flatten the dough, then roll each piece into a 20cm round, about 2-3mm thick. When the pan is hot, cook each flatbread for 1-2 minutes on each side, until puffed up and browned. Spread with the onion and chilli mixture while hot, and serve straightaway with spoonfuls of salad.