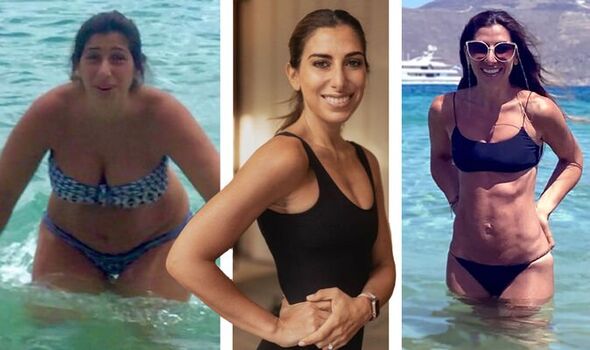 When Rachael Sacerdoti looked in the mirror, she felt “unhappy and really disappointed” with what she saw. The dedicated mum-of-three found herself “spiralling”, and that her “identity had been consumed by motherhood” – so she set about changing herself for the better and dropped an impressive four stone (30kgs). But how did she do it?

Speaking exclusively to Express.co.uk, Rachael said: “I felt stuck and as if I had lost control, I had let myself go and was spiralling. It was really causing me to be very unhappy and anxious. I felt like I was a caged tiger.

“I had been through four pregnancies and had three children and I felt like my identity had been consumed by motherhood.”

Rachael made it very clear that being a mother means the world to her, but the responsibility of being the perfect mum began to “eat her up” as she no longer felt like a human in her own right, which in turn, made her less able to show up as the mother she really wanted to be.

After putting on weight, she found it was causing her “serious back pain”, her feet were “aching and cracking” and she was “constantly tired and lethargic”.

Recalling the day she decided to change it all, her brother Ben had pulled her aside and “made me realise just how much I had let myself go”.

“Not in a nasty way, or a judgement way, but in a concerned and loving way,” Rachael added, “I suppose he staged a one-person intervention!”

“My husband, Daniel, never once said a bad word to me whatever size I was. In fact, he used to say to me the bigger you are the more there is of you to love!”

She admitted that some of her family back home in Singapore were concerned about her health, but there was only one opinion that really mattered to her: her own.

“I didn’t change for anyone else, I changed for me and in so doing, became a better version of me for those around me,” Rachael beamed proudly.

Her journey wasn’t easy though and she ran into many difficulties along the way, with a major player being not knowing where to start.

With that said, there were many times she wanted to give up as she embarked on her lifestyle change; describing it as a “lonely journey”.

“At some points I was probably too strict and restrictive on myself. Many of the lessons I learnt were the hard way,” she said.

“But I was determined and I knew what I wanted to achieve and ultimately that determination and sheer force of mind carried me through.”

And through that epic determination and “sheer b****y mindedness”, Rachael pushed herself to the limit and is now reaping the rewards.

She laughed: “My husband often says that when I get a goal in my sight, I’m like a bulldozer and everyone should move out of the way. Looking back, I guess he is right. It was more brute force than anything.

“I really took the hard way and pushed myself through it. There was nothing else for me to depend on.”

Now seeing how far she’s come, Rachael noted that one of the benefits of “starting from as bad a place” was the “quick wins”, as she progressed from walking for five minutes to a five minute run fairly quickly.

She said: “In the early days the weight fell off quickly and with ease. I also made a point when I set out on the journey, of taking photographs of myself to hold me accountable and allowed me to compare my current position to that where I started.”

Rachael revealed she noticed four main benefits from her weight loss and mental state: “I have learnt how much I am capable of. I set out to achieve something that I thought was impossible and I did it.

“This has given me such a boost in terms of confidence and self-belief. Not only do I look better, I now have a stronger, more powerful body that hurts a lot less and has much more energy to face the challenges of daily life.

“The door to the cage has been unlocked and the world is my oyster. I am happier, less anxious, more focused, more present and more available. I am much happier.”

Not only did she only transform the way she looked and felt about herself, Rachael decided to go one step further and started to help others on their own journeys to a healthier lifestyle.

“What started as a very personal journey has morphed into a large community,” she smiled.

She set up It’s SO Simple in 2020, a coaching brand that caters to women across six continents, with clients ranging from single mums to royalty, top lawyers to doctors.

Speaking of a key element of her own experience that pushed her to start her own coaching business, Rachael explained: “The hardest part of my journey was doing it alone. In It’s SO Simple, our clients are never alone.

“They have coaches and a strong community to cheer them on, support them and help keep them accountable to themselves.”

Recognising that the Rachael she used to be is how many people still feel, she offered up some advice to others who want to make the change.

“I love the expression even a journey of a thousand miles starts with a single step. Make sure you have the right support system in place, this will make your success much more likely,” she urged.

“Never underestimate the importance of what you eat. It really is true that you cannot out train a bad diet.”

“Be kind and gentle to yourself. Don’t look for a quick fix, try to make changes that are sustainable long term. The results may come a bit slower, but they will come and they will last.”

She added: “Do not deprive yourself. I learnt on my journey that it is important sometimes to indulge those cravings. Give yourself permission to do that sometimes.”