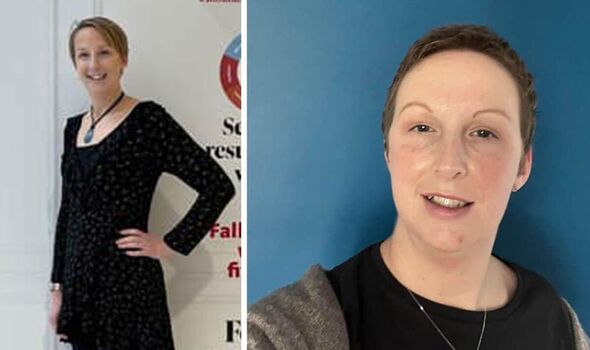 Kirsty Furlong, 40, from Gosport, Hampshire lost three stone with the help of Slimming World. The mother-of-three defied doctors who told her it would be “impossible” to slim down following chemotherapy for breast cancer.

In an interview with Portsmouth News, Kirsty revealed she was diagnosed with breast cancer at the end of 2020.

Over four months, she endured weekly chemotherapy sessions, which resulted in her being in a lot of pain and discomfort.

Then, in June 2021, Kirsty had an operation, which was followed by another four weeks of daily radiotherapy.

Speaking about the experience and impact the therapy had on herself and her family, Kirsty said: “My children saw me at my worst, they saw everything, I couldn’t hide it.

“My first chemotherapy was on my daughter’s fifth birthday,” she added.

As a result of the treatment, and unable to be well enough to exercise and eat healthily, Kirsty put on weight.

After beating cancer, she decided to change her lifestyle and look after her body as best as possible.

Kirsty’s children were also her motive, as she wanted to make sure she was healthy for them.

She said: “After I finished all of my treatment, I was told by the doctors that losing weight would be pretty much impossible after chemotherapy and I wanted to show that I could do it and make this change.”

In a bid to lose weight, Kirsty joined Slimming World, as well as a women’s-only gym, and it wasn’t long before she fell in love with health and fitness.

Speaking about Slimming World, Kirsty said she “absolutely loved it” and “lost 4.5lb” in her first week.

Every week after she also “lost weight”. During her weight loss journey, Kirsty said there were “only a few times” she put on weight.

“I have such a passion [for] losing weight [and want] to show that even if you have had cancer you can still do it.”

Following her successful weight loss, Kirsty now helps others and has become a Slimming World consultant.

Founded in 1969, Slimming World is the UK’s most advanced and effective weight management organisation.

Across the UK, thousands of weekly groups are being held, where millions of people are being helped to eat more healthily and adopt a more active lifestyle.