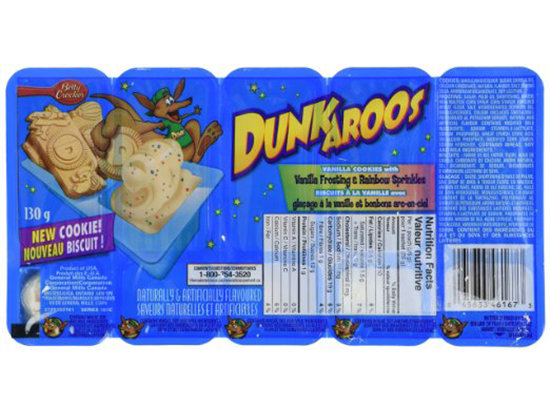 After a hard day of spelling tests and times tables, we all looked forward to opening the pantry or fridge to dive into what we’d been dreaming about since lunch period: the after school snack. In retrospect, many of these go-to foods were terrible for us, but hey– you aced that state capitals test. You earned it. If you’re yearning for the same satisfaction after a day of toiling away in your cubicle, here are some adult takes on your favorite childhood eats.

It’s hard to imagine two more irresistible items than cookies and frosting. But since these dippable delights aren’t even available anymore, making your own is the way to go.

That’s right, rather than shelling out the big bucks for store-bought Nutella, you could be raking it in by making and selling your own on the black market. But if the vanilla Dunkaroos were more your thing, tart it up a bit with a creamy mascarpone frosting. When it comes to cookies, you can’t go wrong with a simple shortbread. Of course if it’s really all about the shapes to you, you could always just use animal crackers.

Handi-Snacks, like Dunakaroos, put the power of applying the right amount of spread in your hands (which usually meant going overboard and eating the last couple crackers dry). Since nothing can replace the tactile satisfaction of those little red plastic sticks, our adult-ified upgrade focuses on the breadstick version.

Ok, there’s nothing wrong with tater tots. They’re crispy nuggets of potato that you can dip them in just about anything. No wonder the hipster bar around the corner still serves them (and no wonder I’m there twice a week ordering them). But let’s say you’re throwing a fancy dinner party to impress your boss like in a sitcom or something…

Ok, there’s nothing wrong with tater tots. They’re crispy nuggets of potato that you can dip in just about anything. No wonder the hipster bar around the corner still serves them (and no wonder I’m there twice a week ordering them). But let’s say you’re throwing a fancy dinner party to impress your boss like in a sitcom or something…

Tater tots are pretty much croquettes already, but when you add mozzarella cheese and herbs you’ve got a refined side dish or appetizer for any occasion. As adults, however, we tend to watch what we’re eating so you could also try roasting up crispy whole baby potatoes instead.

As far as 10-year-old us knew, the Hot Pocket fresh from the microwave with it’s space-age crisping sleeve was the pinnacle of molecular gastronomy. Okay, so it was a piece of cardboard that kept the crust from getting soggy. It was still impressive. In just a couple minutes we had a handheld pizza we could take to the couch to watch Nickelodeon while we waited impatiently for the filling to cool down from surface-of-the-sun level temperature.

Empanadas are not only the DIY Hot Pocket, they’re also a blank canvas for your newly appreciated adult flavor profiles. You can stay safe with a pizza version or for something a little more advanced, you could swap that pepperoni for chorizo and dip it the whole thing guacamole. Isn’t being an adult great?

Not only are chicken nuggets delicious, but when they’re shaped like dinosaurs they provide a real sense of empowerment. Nothing builds confidence like biting the head off of a T-Rex. We ate so many of these as kids, it’s a wonder they’re not extinct as well. Thankfully if they ever did disappear from store shelves, you can make them on your own.

When it comes to Dino Nuggets, we don’t wanna grow up. Look, if an adult person wants to play with prehistoric-shaped chicken reptiles in the privacy of their own home, who are we to judge? Make your own chicken mix, and shape them into cookie cutters of your choosing, the possibilities are endless. There’s also a healthier and non-fried version of nuggets you can make, but those shapes are limited by your knife skills.

For a lot of kids, this is their first cooking experience. Okay, so the only skill involved is not spilling water and knowing what the number buttons mean on the microwave. The appeal of Easy Mac was always that it only took a minute or two to enjoy something that normally required so much more time and effort (fine, 15 minutes and boiling water).

As long as you’ve got pasta ready in the fridge (and why wouldn’t you?) there’s a warm, cheese meal awaiting you in just minutes. In fact, there are a bunch of recipes you can make in a mug which you can find in the Mug Meals cookbook. The top rack of your dishwasher is going to fill up fast.

They weren’t candy, mom, it says “made with real fruit” right on the box! (Okay, so for all we know that might just mean they ran the corn syrup pump on fermented apple juice.) Among the bevy of roll-ups, gummies and leathers available on the market, nothing had the sweet satisfaction of Gushers. We admit now that having your food squirt into your mouth sounds much less appetizing than it did as a kid, but nonetheless these juice-filled jellies took fruit snacks to another level. Speaking of juice…

That’s right, those spendy bottles of cold-pressed oranges and kale, when combined with gelatin, can turn into reasonably healthy and satisfyingly chewy fruit stacks. And while you may have trouble finding a Shark Bites mold, the fun shapes you can make these into are only limited by your access to novelty ice cube trays.