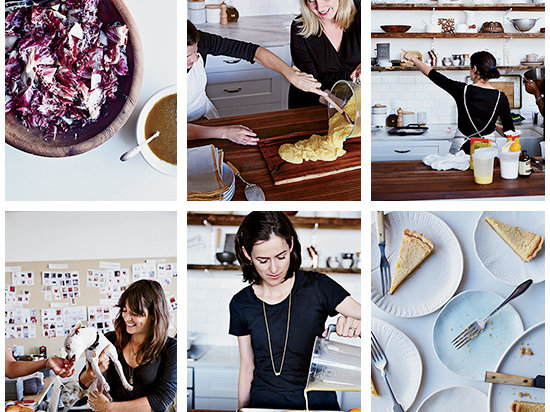 F&W’s #FOODWINEWOMEN series spotlights top women in food and drink in collaboration with Toklas Society. Use the hashtag on Twitter (@foodandwine) to share lessons from your (real and dream) mentors for the chance to be featured.

With apologies to my husband, I found my soul mate on Food52. Or maybe she’s more of an imaginary friend. Sonali (a.k.a. the Foodie Physician) and I have never met. She lives in Ft. Lauderdale, where she glazes brussels sprouts in miso and maple syrup (just like I do), sauces orecchiette (objectively the best pasta shape) with ricotta and pancetta, and braises chicken with olives and preserved lemons (me, too!). We are in agreement about major life issues: Only mayo, a tiny bit of celery and one Bibb lettuce leaf belong in lobster rolls. Basically, I want to cook everything she cooks. And though she has a food blog, I would probably never have found it in the heartless wilds of the Internet. Connections like these are the genius of Food52, a crowdsourced recipe hub staffed by editors and test cooks.

Inside Food52’s lofty midtown New York office, everything is just so: When I was offered a glass of water, it arrived in a graceful Weck carafe with a bottle-green mason jar of ice alongside. Here and there, citrus fruits are stacked attractively. Everyone seems to have a really nice haircut. If that sounds obsessively curated, that’s what Food52 does. Recipes pour in every day from home kitchens all around the world—the majority of the website’s 30,000 recipes come straight from readers—and it’s up to the staff to pick the most promising and highlight them. The dishes that members and editors like best are tested, photographed and featured prominently. Any one of the site’s more than 400,000 users can upload an original recipe at any time, either to enter one of the biweekly contests (best one-pot meal, best avocado recipe) or just because they want to share.

Cofounders Amanda Hesser (the CEO) and Merrill Stubbs (the editor in chief) came up with the idea for a user-generated cooking site in 2008, when they were working together on The Essential New York Times Cookbook. “We felt there was an opportunity to build a gathering place,” says Stubbs. Since then, Food52 has expanded to produce three cookbooks and launch an e-commerce venture called Provisions. They’re newly flush with six million dollars in investments (partly from Scripps Networks Interactive, parent company of Food Network). A bigger new office with two test kitchens is under construction.

The secret to Food52’s success might be that it actually delivers on the promise of connection: It’s an online community that behaves like a real-life community—one of the few websites where reading the comments doesn’t make you want to lie down and die. And Food52-ers want the interaction to transcend the Internet—from the very beginning, Food52 potlucks sprang up around the country. (Sonali, call me!)

That spirit extends to the Food52 office, where Company Snack Time is a monthly tradition that’s half team-building exercise, half party. Staffers break up into groups to cook recipes from the site, like the creamy polenta, apple-and-stout-braised short ribs and ultrasimple lemon tart on the next pages. (These dishes are some of the staff’s current favorites.) Sometimes temporary tattoos are involved. Spanky, the resident Chihuahua and meat editor, is always invited. For a kitchen of 400,000 cooks, it’s pretty cozy.

Nominate the women who inspire you @foodandwine using #FOODWINEWOMEN.