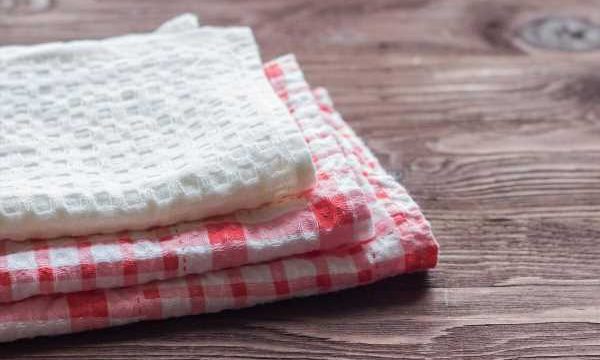 In my kitchen, I use almost exclusively linen kitchen towels. I rarely buy paper towels, and try to limit my use of them because they’re expensive and wasteful. Instead, I have a lot of reusable towels that get called into action for everything from wiping down dirty countertops, wrapping around fresh herbs, and serving as a trivet under hot pans on the table. It’s a system that works well for me, but it does result in a lot of dirty towels.

For a long time, I had a basket in one cabinet that held those dirty towels until there were enough to run a load of laundry. That plan was flawed, though, because sometimes wet and dirty towels would sit in the basket for up to a week, causing them to mildew, and in some cases, get moldy. Even in the best case scenario, any stains would sit on the towels for long enough that they completely set and there was no chance of getting them back to their once-white appearance.

Recently, though, a better system was suggested to me by a friend who has been leaning on kitchen towels far longer than I have. She recommended keeping a bucket full of Oxy-Clean-spiked water in a cabinet or closet, and tossing any used towels in there. Then, when the bucket is full, simply dump the contents into your washing machine and wash the towels in hot water.

This suggestion solves two of my biggest kitchen towel problems: Because they’re soaking in a bucket of water, the towels can’t mildew or mold, and the Oxy-Clean begins treating stains the moment the towel hits the water. My laundry closet happens to be right off my kitchen, so I keep the bucket right next to my washing machine, but you could easily tuck it in a cabinet under the sink, or in an unused corner of a pantry. I also recommend keeping a big spoon nearby, so you can submerge each towel when you toss them in the bucket —I find that they tend to sit on top if not given a little encouragement.

I’m not too precious about my towels —they are utility items and I treat them that way, so I don’t mind if they’re not 100 percent pristine. But this system keeps them considerably cleaner than the old way, and saves me having to think about the towels, except when I toss them in the laundry. It’s a simple solution to a basic problem, but it’s one of those systems that makes me feel like I’m running my household successfully—and who couldn’t use a little household win these days.