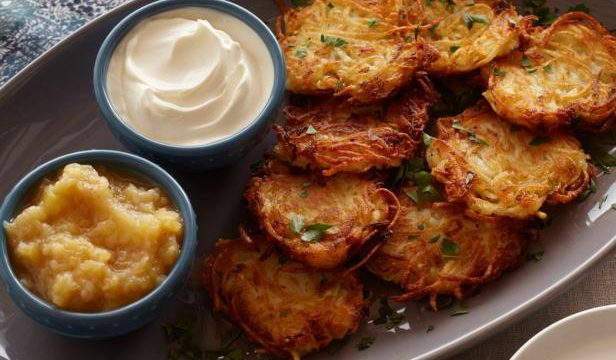 These crispy potato latkes get a gorgeous jewel tone from shredded beets and carrots. Perfect for any special, holiday celebration.

Get the Recipe:Beet and Carrot Latkes

Molly gives her latkes a new twist by serving them with a savory, onion dip. She incorporates a subtle of sweetness with caramelized onions (instead of applesauce).

Get the Recipe:Potato Latkes with Caramelized Onion Sour Cream

For a less-traditional take on potato latkes, Molly adds shredded Brussels sprouts along with the potatoes. The latkes not only taste great, they look beautiful too. The perfect accompaniment? Her simple Balsamic-Dijon dipping sauce.

Get the Recipe:Brussels Sprout Latkes

Get the Recipe:Quick Potato and Carrot Latkes

Get the Recipe:Crispy Potato Cake

Get the Recipe:Sweet Potato Latkes

We’ve spruced up traditional latkes by incorporating a few readily available root vegetables to lend dimension—and color—to the classic recipe. The vegetables can be shredded in a food processor or by hand using a box grater.

Get the Recipe:Root Vegetable Latkes

While the flavor profile of these latkes is a complete departure from a classic potato latke recipe, they fry up just as crispy and lacey as ever. The spiced relish starts with a base of caramelized onions for depth and dimension. We found that the addition of one russet potato in the batter lends just enough potato starch to keep the latkes creamy on the inside without detracting from the sweet flavor of the carrots and sweet potatoes.

Get the Recipe:Sweet Potato and Carrot Latkes with Spiced Apple-Cranberry Relish