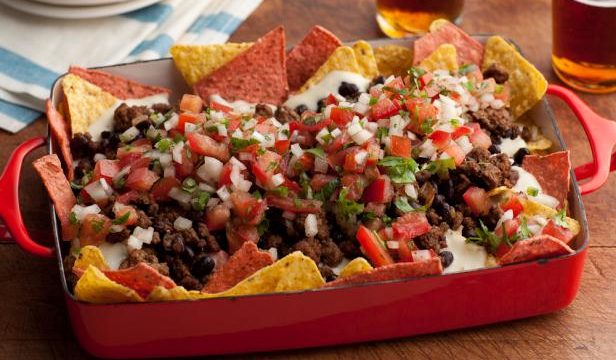 It’s no surprise that Rachael’s quick and easy nachos live up to their name. Topped with homemade pico de gallo, beef, beans and a creamy pepper jack cheese sauce they are truly one super snack.

Keep it simple and top tortilla chips with rotisserie chicken (doused in a tangy Buffalo-style sauce, of course), celery and blue cheese for a quick and flavorful snack or app.

Good things take time — and Ree’s Cowboy Nachos are no exception. Plan ahead: the beef brisket needs to marinate for at least 24 hours before you cook it.

Never thought about adding chocolate to your plate of nachos? You should! Spiced Mexican chocolate is the perfect complement to the savory flavors in the mole sauce for these cheese- and cilantro-topped chips.

Fresh homemade salsa and barbecue chicken nuggets bring bright and summery flavors to these crowd-friendly nachos any time of year. The salsa can be made earlier in the day and refrigerated; add the avocado just before serving.

Get the Recipe:Loaded Barbecue Chicken Nachos

This is everything you love about nachos, made hearty enough for dinner. We discovered that standing the chips upright in the egg mixture gets them crispy on top and adds body to the bake below. This is ridiculously delicious, and difficult to stop eating.

These chef-worthy nachos have all the flavor components of the traditional version. The ragu is meaty and savory, the cheese is rich and subtly sweet and a topping of pickled onions adds just a bit of tang to round everything out.

Get the Recipe:Spicy Sausage Ragu Nachos With Pickled Onions

This lightened-up recipe has everything you could want in a platter of nachos: the crunchiness of homemade tortilla chips, spiciness from saucy adobo-tinged pinto beans and creaminess from roasted sweet potatoes and avocado, all topped with a fresh salsa.

Get the Recipe:Baked Nachos with Roasted Sweet Potatoes

Use up your Thanksgiving leftovers in a surprising way — by making these hearty nachos.

Get the Recipe:Leftover Thanksgiving Nachos

Trisha brings the classic flavor of sweet-and-smoky baked beans to nachos with this bacon- and barbecue sauce-topped version.

Get the Recipe:Bacon BBQ Nachos

How do you get away with serving nachos at your next dinner party? Top individual chips with citrus-marinated shrimp! They’ll have all the salty crunch you’re craving, but with an elegant finish that’s perfect for entertaining guests.

Get the Recipe:Citrus Shrimp Nachos

You only need a handful of ingredients to make these super flavorful, sweet and spicy nachos. Not planning to fire up the grill? You can cook the pork tenderloin on an indoor grill pan or in the oven, instead.

Get the Recipe:Jerk Pork Nachos

Our favorite snack is now welcome at the breakfast table. These easy nachos come together quickly while you make the eggs and are easy to double for entertaining.

Homemade pita chips are the perfect base for this Greek-inspired take on nachos. Just be sure to set a time while your pita triangles are in the oven — it’s easy to get distracted and let them burn!

Get the Recipe:Greek Pita Nachos

These clever foil packets are quick to put together and cook up perfectly for a summer barbecue. And since they are personal-size, your crowd can eat them with our suggested toppings or their favorites.

Get the Recipe:Grilled Loaded Nachos

These seasonally inspired nachos will make you rethink your go-to snack. The sweetness of the apple pico de gallo bring just the right amount of balance to savory sausage and browned Brussels sprouts.

Making your own tortilla chips and refried beans really takes a traditional plate of nachos to the next level.

A simple way to upgrade your nachos? Try a different chip! In this version, we use subtly sweet plantain chips to balance out the spicy, chile-infused chicken.

Get the Recipe:Plantain Chip Nachos with Spicy Chicken

We love these tiny, two-bite nacho cups. They crisp, crunchy and topped with melted cheese — but packed with the flavor of citrus, herbs, peanut and jalapenos.

Get the Recipe:Thai Beef Nachos

Molly makes her pulled pork nachos in a cast-iron skillet. This makes them easy for sharing. Just be sure to let everyone know the pan is hot.

Get the Recipe:BBQ Pulled Pork Nachos

How do you give nachos an Italian spin? Beef, sausage, Italian cheeses and a Peppadew pepper salsa.

Everyone knows the best part of a Cubano sandwich is the pickles — an ingredient that Sunny celebrates (with a tasty pickled topping) in this pork-topped plate.

Get the Recipe:Sunny’s Cubano Nachos

If you can’t decide between serving nachos or cheeseburgers at your next party, then don’t! Homemade chips each topped with all the bacony, cheesy, meaty flavors of a great burger are the marriage of the century — you’ll definitely say “I do.”

These nachos earn may their name because of Sunny’s 5-star nacho meat (a blend of Mexican chorizo and beef) but we’re sure you’ll give them a 5-star rating once you taste them!

We’ll admit: this pizza-inspired snack may not look like nachos at first glance, but it features everything you love about the traditional recipe: a good crispy crunch, lots of flavor and (of course) gooey, melted cheese holding it all together!