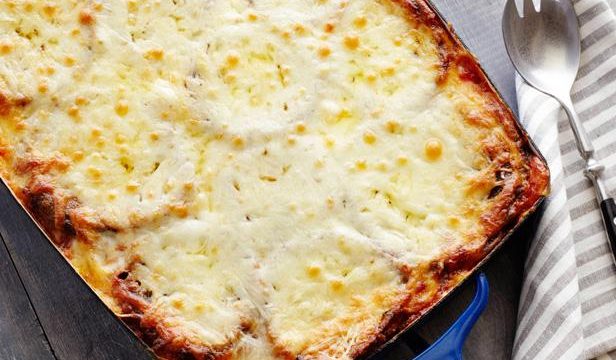 Filled with a trio of cheeses, a mouthwatering homemade red sauce and crispy fried eggplant rounds, Alex Guarnaschelli’s vegetarian dish gives any meat-filled Parm a run for its money. She admits she’d eat this for her last meal on Earth — how can you argue with that?

Skip the messy process of frying eggplant and bake it on a sheet pan instead. The thick slices get the same crisp exterior and soft interior, but you’ll use a lot less oil.

Get the Recipe:No-Fry Sheet-Pan Eggplant Parmesan

Moussaka on the Grill

Craving hearty comfort food while trying to make the most of grilling season? Michael Symon’s got just the recipe.

Get the Recipe:Moussaka on the Grill

If your mom didn’t make stuffed eggplant for dinner when you were a kid, this recipe will make you really wish she had.

Get the Recipe:Mom’s Stuffed Eggplant

Giada De Laurentiis calls this her version of Italian comfort food. And when you’re talking about baking a hearty meatloaf, layering it with crispy fried eggplant, then topping with tomato-basil marinara and mozzarella, we couldn’t agree more.

Get the Recipe:Eggplant Parmesan Meatloaf

The layers of eggplant, Parmesan, mozzarella and marinara in this dish are definitely crave-worthy, but you’ll love the quick marinara so much we know you’ll be making it again and again. You can keep it in the fridge for up to three days or store in the freezer for two months.

Change up your chili routine by adding hearty lentils and eggplant cubes to the mix. The longer you let the chili simmer, the thicker it will get.

Get the Recipe:Black Bean, Lentil and Eggplant Chili

This dish is also great as a sandwich. Simply place a chicken-and-eggplant stack in a toasted, soft whole-wheat hoagie.

Get the Recipe:Lightened Chicken and Eggplant Parmesan

A mixture of ricotta, half-and-half, and Parmesan elevates Ina Garten’s individual gratins to a superior level of creaminess.

Ina roasts a whole eggplant for her flavorful caponata. Be sure to follow her advice and prick your eggplant all over with a fork before roasting — this will help keep the eggplant from exploding in your oven! Once the eggplant is cooked, the skin will peel off easily.

Get the Recipe:Roasted Eggplant Caponata

If you’ve got the time, salt the eggplant and let it rest for about an hour before you start breading and frying. Salting the eggplant will help draw out the bitterness. Simply rinse the eggplant with cold water and dry thoroughly with a kitchen towel so your dish won’t be extra salty.

Who says meatballs have to be made with meat? Not Melissa d’Arabian! After roasting, eggplant develops a meaty flavor that complements marinara sauce perfectly.

Get the Recipe:Eggplant Meatballs with Marinara Sauce

Married to a cattle rancher, Ree Drummond is no stranger to steak. But these Greek grilled eggplant steaks are meatless and so flavorful even diehard meat lovers will request them.

Get the Recipe:Greek Grilled Eggplant Steaks

If you’re not into frying, this recipe is for you — just bread and bake the eggplant to perfection. Once the slices are crispy, layer them with sauce and mozzarella, then broil till the cheese is melted and bubbly.

Get the Recipe:Crispy Eggplant Parmesan

This easy pasta dinner is as satisfying on a Wednesday as it is on a weekend with company. Sauteing diced eggplant alongside sweet Italian sausage gives the dish extra flavor and texture.

Get the Recipe:Sausage and Eggplant Fusilli

Everything is better in mini form — even eggplant Parm. Giada’s little crisps take only 35 minutes from start to finish, and they’re amazing little appetizers guests can eat with one hand.

Get the Recipe:Mini Eggplant Parmesan

Make each of Trisha Yearwood’s eggplant-stacked towers individually, layering crispy fried eggplant with marinara, mozzarella and Parmesan. A fresh basil leaf on top at the end is the perfect finishing touch.

Get the Recipe:Eggplant Parmesan Towers

Grilled eggplant adds a surprisingly delicious flavor to Valerie Bertinelli’s eggplant Parm, just when we thought the cheesy classic couldn’t get any better.

Get the Recipe:Grilled Eggplant Parm

Just one Japanese eggplant, a little cooking spray and a sprinkle of salt will give you crispy chips. We are you to eat just one!

Jeff Mauro throws together an easy and crispy eggplant Parmesan that can feed a dozen people. Best of all, it comes together in only 30 minutes.