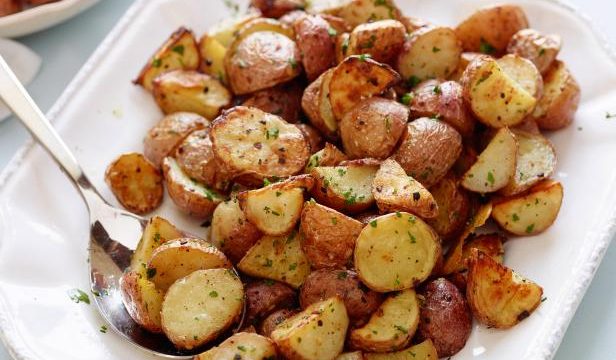 Hundreds of five-star reviews don’t lie! Ina’s roasted potatoes are a fan-favorite for good reason; They come out perfectly crispy every time.

Get the Recipe:Garlic Roasted Potatoes

These super creamy mashed potatoes couldn’t be any easier — no dicing and no draining. This is a great make-ahead recipe any time of the year, but especially around the holidays, when you’re trying to juggle multiple dishes.

Get the Recipe:Instant Pot Mashed Potatoes

This casserole combines all the irresistible features of a loaded spud, but is cooked and served family style for an extra-hearty side.

Get the Recipe:Loaded Baked Potato Casserole

Don’t be fooled. These aren’t ordinary twice-baked potatoes: beneath the golden mashed potato top is a rich beef and vegetable filling. And unlike your casserole dish, the potato bowls are also edible.

Get the Recipe:Shepherd’s Pie Potato Bowls

Lemon, garlic and anchovies rule this creamy potato salad for a Caesar-inspired side dish.

Get the Recipe:Easy Caesar Potato Salad

Filled with bacon bits, grated Cheddar and green onions, Ree’s hearty potatoes are a real crowd-pleaser. Meal prep tip: After filling the potatoes, cover and let sit in the fridge. When you’re ready to eat, pop ‘em in the oven for a quick side dish!

The name says it all. Ree tosses diced potatoes with onion and bell peppers, then seasons the veggies with salt, pepper and a kick of cayenne. The whole thing is roasted on a sheet pan for simple serving and even easier cleanup.

Get the Recipe:Best Breakfast Potatoes Ever

Robert’s creamy soup is the perfect cold-weather dish. To make it extra filling, serve with crusty bread for dipping.

Get the Recipe:Potato Leek Soup

Caramelized on the outside and creamy on the inside, these potatoes are utterly irresistible thanks to the infused flavors of garlic, herbs and chicken broth.

This dip tastes just like mashed potatoes — topped with crispy bacon, garlic, Cheddar and scallions. Scoop it up with potato chips or veggies for a crowd-pleasing snack or app.

Get the Recipe:Loaded Potato Skin Dip

Somewhere between oven-roasted potatoes and crispy hash, these little creamer potatoes are boiled in water with baking soda before being smashed. The alkaline in the baking soda helps the skins crisp up quickly. Smashing increases their surface area and contact with the pan. The result is the crunchiest-ever crust.

Get the Recipe:Crispiest Ever Potatoes

Our twist on Potatoes Anna (thinly sliced potatoes cooked in lots of delicious butter). Use a mix of russet and sweet potatoes — and add fresh, fragrant rosemary.

In need of some comfort food? Guy describes his stick-to-your-ribs soup as a “cross between fondue and a baked potato.” Serve it on a cold, chilly night for the ultimate hearty meal.

This simple but tasty twist on French fries is so impressive, you won’t miss the drive-through.

Boiling your potatoes in super-salty water allows them to cook up extra creamy – and it’s the secret to the flavorful crust that forms on the outside.

This is a lovely way to enjoy smoked salmon without the bagel. The crispy potato pancake is perfect for a special brunch.

Get the Recipe:Potato Rosti with a Smoked Salmon Rose

Tyler’s ultra-silky mashed potatoes are completely lump-free. His secret? Always starts the potatoes in cold water. That way, the temperature rises consistently, ensuring that every potato is cooked evenly and can be smoothly mashed.

Rethink roasted potatoes by upgrading this simple side dish with the bright, citrusy flavor of lemon and the savory taste of Parmesan cheese.

Get the Recipe:Lemon-Parmesan Roasted Potatoes

Looking for an alternative to your traditional potato side dish? Whip up a batch of these fluffy golden puffs. They’re sure to become a family favorite.

When you need an elegant appetizer fast, reach for baby red potatoes. Cooked tender and topped with creme fraiche and fresh herbs, they make the perfect pre-dinner bite.

What’s the key to Ina’s potato salad? Tons of texture – she combines soft potatoes, a creamy mayo sauce and crisp celery for a complex bite that’s full of rich flavor.

Named for its comforting abilities, Ree’s crowd-pleasing casserole is a traditional potluck offering. Shredded hash browns set up the base for the dish, which gets a salty crunch from a crushed potato chip topping.

Taco night just got spud-tactular! A sprinkle of taco seasoning blend turns a simple oven-roasted side into something special.

Ree’s potatoes au gratin are what she calls a “throw-together dish.” She dices russet potatoes, then covers them with a simple cream sauce. Freshly grated Cheddar and green onions are all that’s needed for an over-the-top finish to this creamy, dreamy side dish.

Get the Recipe:Perfect Potatoes au Gratin

These classic potato pancakes are super crispy on the outside but soft and moist on the inside. This recipe calls for shredded potatoes for a traditional look, and a little bit of onion for that perfect hint of sweetness.

It’s amazing how just one clove of garlic really ups the flavor on classic mashed potatoes. For extra creaminess, make sure you use Yukon Gold potatoes, like the recipe calls for.

This showstopper of a side dish is not for the faint of heart. Heavy cream and four different types of cheese create the gooey, creamy sauce that defines the decadent treat.

Get the Recipe:Four-Cheese Scalloped Potatoes

The perfect baked potato is crunchy on the outside and light on the inside, and Alton’s recipe guarantees just that. He bakes the potato directly on the oven rack, which makes for crispier skin.

Get the Recipe:The Baked Potato

Unlike American potato salad, German potato salad is made with a vinegar base. Always one for bold flavors, Bobby takes his to the next level by adding bacon, mustard and lots of green onions.

Get the Recipe:German Potato Salad

The slow cooker takes an already-simple classic recipe and makes it even easier. Just toss the potatoes into a slow cooker, turn it on low and walk away for a few hours. When you return, the potatoes will be perfectly tender and ready to be mashed. Best of all, the slow cooker traps all the potato flavor, making these spuds extra potatoey.

Get the Recipe:Slow-Cooker Mashed Potatoes

It’s important that you don’t crowd your Dutch oven when you’re making this recipe. Fry your potatoes in two batches and your spuds will have enough space to cook up correctly – with a nice, crispy crust!

Get the Recipe:Perfect Fried Potatoes

Ree stops slicing her russet potatoes just before the bottom, then brushes the whole thing with a butter-chive mixture. The end result is a luscious, crispy side dish that tastes just as good as it looks.

Trisha’s casserole recipe is passed down from her mom, and she says it’s “like a cheeseburger on top of potatoes.” A breadcrumb topping is the cherry on top of this delightful comfort food.

Crispy on the outside and creamy on the inside — what’s not to love about these buttery little spuds?

Save time and cleanup with the Instant Pot! This handy, all-in-one appliance will quickly cook your potatoes and keep them warm — with just one dish to wash.

Get the Recipe:Quick Ranch Potatoes

You only need four pantry staples (plus a little salt and black pepper) to make these savory, golden-brown fritters. The key is to make sure you squeeze as much liquid out of the grated potatoes as possible. That way, the latkes will be nice and crispy.