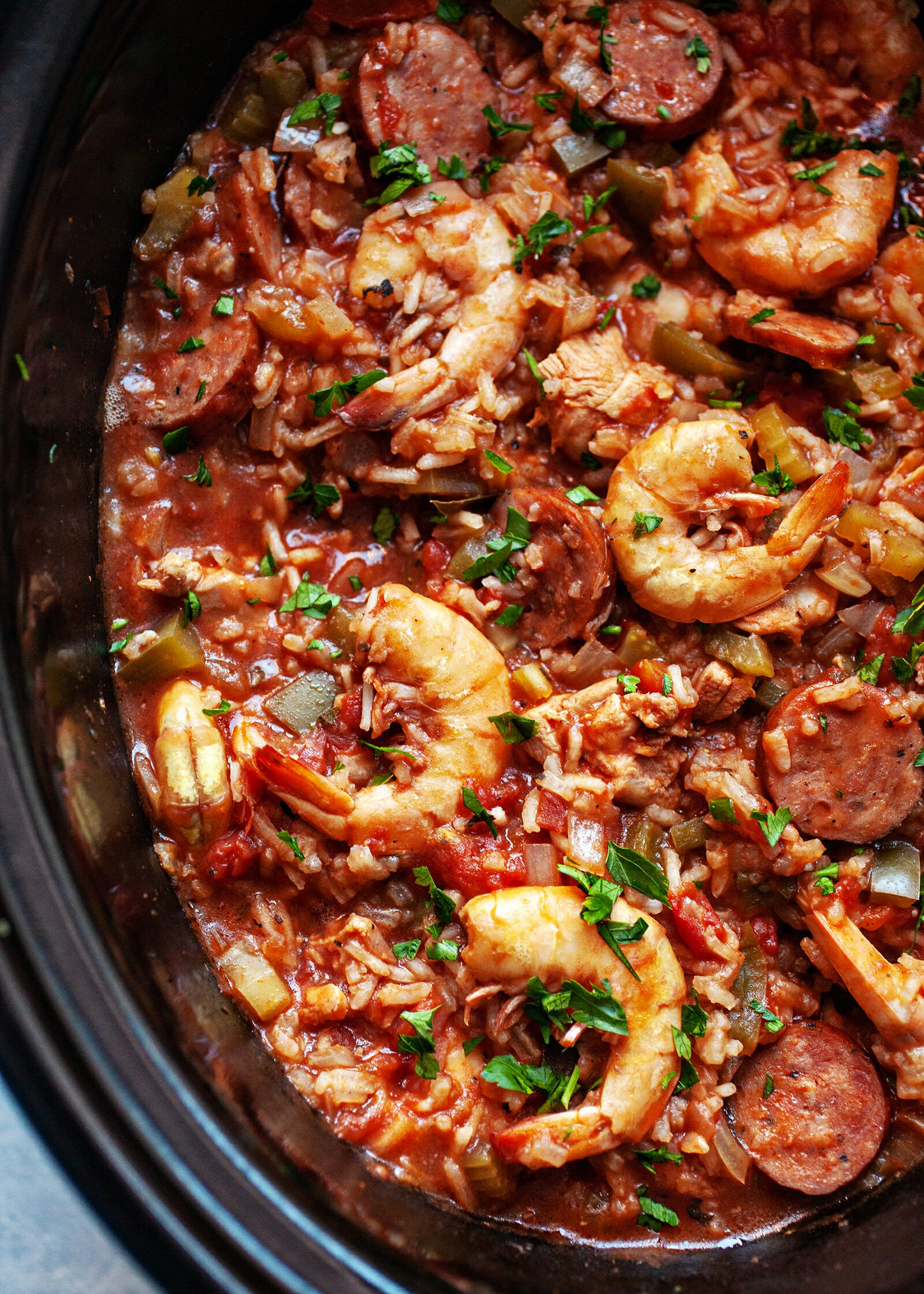 Jambalaya is one of my favorite one-pot style recipes. The combo of sausage, chicken, and shrimp with Creole seasoning and rice is always a winner in my book. Making it in a slow cooker makes it even easier to prepare!

There are a few things to watch out for when assembling the recipe, but if you follow the tips below, you’ll be left with a great jambalaya that’s sure to please a crowd on a chilly winter day. Enjoy!

The base ingredients for these two classic Creole dishes are almost identical. The main difference is that gumbo incorporates a roux, or some sort of thickener, and is served either by itself, almost like a chili, or over a bed of rice.

Jambalaya is more like arroz con pollo, in that the rice and other ingredients cook together. Jambalaya is actually a little trickier to pull off because it can be easy to overcook or undercook the rice—it’s harder to tell when the rice is done because there are other ingredients involved that will cook at different rates.

But have no fear! It can be done!

The Creole Seasoning: DIY or Buy?

I normally just buy my Creole seasoning. I like Tony Chachere’s Original Creole seasoning which is a classic and available in most supermarkets nationwide. It is not the same as Cajun seasoning, which is more of a blackening spice. I wouldn’t substitute Creole for Cajun!

If you want make your own Creole seasoning, you can get a good result by stirring together the following:

Store whatever you don’t use for this recipe in a tightly covered container.

Whatever you do, if your Creole seasoning has salt in it already, and most of them will, make sure you taste as you go. You may not need additional salt during the cooking process. It’s much easier to add salt in; it’s much harder to take it out.

The Holy Trinity in Creole Cuisine

Almost any classic Creole recipe will start with what’s often referred to as the “holy trinity” of onion, bell pepper, and celery. This is a great start to so many recipes, and you better believe I include it in this slow cooker version as well.

Take the time to dice your vegetables to a similar size so they cook at the same rate, and you don’t end up with any huge chunks.

How to Prep the Shrimp

Buy unpeeled shrimp and leave the shells on, but use kitchen shears to cut the shells up the backs. The shells add a lot of flavor to the dish and also help prevent the shrimp from becoming overcooked and rubbery during slow cooking, which is why we leave them on. But cutting them up the backs now will make them easier to peel at the table when eating.

COOK THIS JAMBALAYA IN TWO STAGES

If you toss all the ingredients in this recipe in a slow cooker and hit go, you would be in for disappointment after 3 to 4 hours of cooking. The rice would be soggy and the shrimp would be like rubber. No, thank you!

To prevent that, cook this jambalaya in two stages.

Stage one is for cooking the trinity, garlic, spices, tomato, stock, chicken, and sausage. This stage you can cook for a long time. It’ll take at least 3 to 4 hours on high heat, but if you were trying to space it out more, you could cook it on low heat for up to 6 hours.

Then it’s time to add the rice and shrimp! Rinse the rice really well with cold water to get off extra starch before adding it to the pot. Stir the rice and shrimp into the jambalaya at the same time and then cook for another 30 to 45 minutes more.

The final cooking time once you add the rice and shrimp depends a lot on your exact slow cooker. It’s done, though, when the rice is tender. The shrimp should cook quickly so I wouldn’t worry about testing those. The rice is what you are watching.

When the rice is cooked, taste the jambalaya and season it with salt and pepper to your liking, if needed. Then garnish it with fresh parsley and serve!