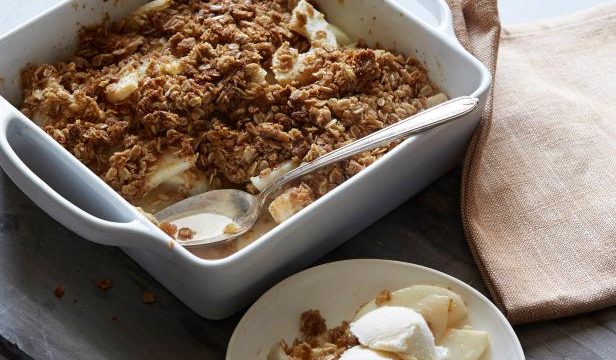 The warm, fragrant spiciness of fresh ginger is the perfect complement to the sweetness of the baked pears and brown sugar-oat topping.

Get the Recipe:Pear Ginger Crumble

Sweet pears, salty blue cheese, buttery nuts – when it comes to flavor, this simple, 20-minute salad recipe has it all.

Get the Recipe:Pear and Blue Cheese Salad

Ina bakes in-season pears in a rich, custard-like batter for a simple and elegant dessert. Clafouti is delicious served warm or at room temperature, making it a wonderful choice when you need something that can be baked ahead.

Juicy pears work together with dried cranberries and fragrant onion and rosemary to give this simple pork roast a delicious fall-inspired upgrade.

Get the Recipe:Roast Pork Loin with Pears and Cranberries

The secret ingredient in this fruit-and-nut quick bread? Shredded pears. They keep the bread moist and add extra sweetness.

Get the Recipe:Pear-Walnut-Cranberry Quick Bread with Vanilla Bean Glaze

Fennel-Pear Salad with Grapes and Pecans

We can’t get enough of the sweet-and-refreshing flavor of this simple salad. The juicy pears and grapes provide more than enough balance against the subtle licorice-like flavor of the fennel, while sliced celery adds a little bit of brightness to finish it off.

Get the Recipe:Fennel-Pear Salad with Grapes and Pecans

Pork and apple are a common pairing during the cooler months so it’s no surprise that pear works just as well. We use the fruit to make a quick, microwave sweet-and-spiced chutney — that brings tons of flavor to plain pork chops.

Get the Recipe:Pork Chops with Pear Chutney

This eye-catching dessert uses the same method as the pineapple upside-down cake but relies on fall-favorite ingredients like fresh pears, maple and ground cardamom.

Get the Recipe:Maple-Pear Upside Down Cake

There are a lot of ways to enjoy pears (fresh from the orchard, baked into desserts, as a topping for pork chops, and more), each one as delicious as the next. But, one of our favorite ways to have this in-season fruit is soaked in a flute of brandy and champagne — it’s the perfect treat after sipping down your cocktail!

Get the Recipe:Spiced Apple and Pear Pie

Get the Recipe:Mushroom Pies with Pear Salad

The natural sweetness of fresh apples and pears makes this homemade sauce a standout over the store-bought version. Lemon juice adds brightness and keeps the fruit from browning, and cinnamon and nutmeg lend warm spice notes.

Get the Recipe:Spiced Apple-Pear Sauce

Get the Recipe:Red Wine Poached Pears with Mascarpone Filling

Get the Recipe:Gingered Pears and Parsnips

This recipe is perfect for autumn or winter when the petite seckel pears are in season (but feel free to use any variety). It has a surprising crunch, creating a delicious new version of guacamole. The pistachios on top make it extra special and contrast nicely with the pear and avocado.

Get the Recipe:Pear and Pistachio Guacamole

Get the Recipe:Celery Root and Pear Puree

We love the flavors of pear and celery together. They make a perfect lemonade that’s packed with vitamin C. Be sure to drink your juice as soon as possible after it’s made for the most nutritious bang. Adding chia seeds helps replace the fiber that is lost in the juicing process.

Get the Recipe:Pear and Fennel Salad

Get the Recipe:Vanilla Poached Pears

Get the Recipe:Pear-Pecan Upside-Down Cake

Get the Recipe:Riesling Poached Pears with Cardamom Cream

Get the Recipe:Taleggio and Pear Panini

Get the Recipe:Slow Cooked Winter Bread Pudding with Dried Pears