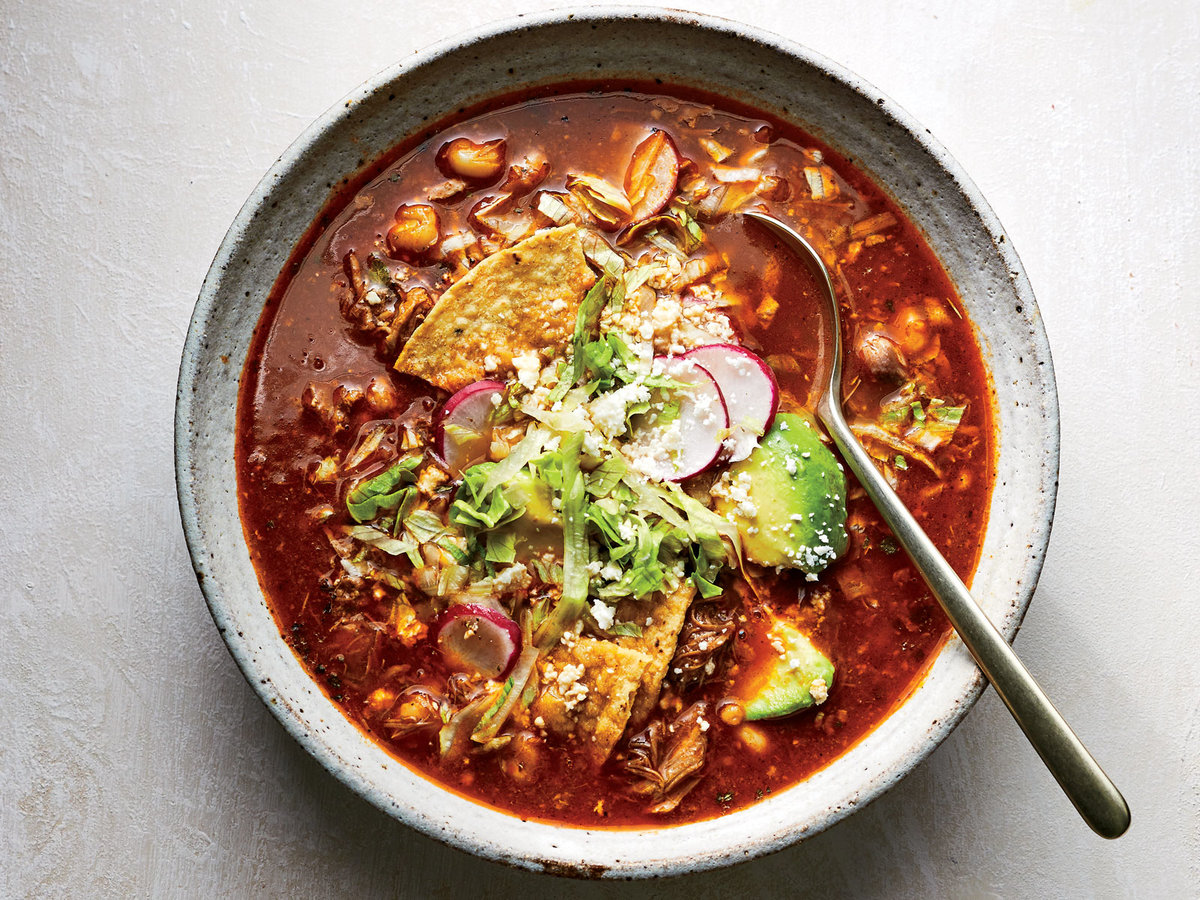 I had posole for the first time as a high schooler living abroad in Cuernavaca. Most weekends, my friends and would go to bars with my host mother, and she would get us drunk on cheap tequila. On one particular hungover morning, she loaded me into the back of her Jeep, took me to a restaurant in the mall, and ordered me my first bowl of posole. The space was drab and cramped, and there wasn’t even a menu, but that posole brought me back to life. t was nourishing like a cup of broth on a sick day—bright with lime, rich from the chiles and pork. It was soup, plain and simple. And in that moment it was everything I wanted.

Before posole was my hangover cure, it was a ceremonial dish for ancient Aztecs—corn was considered a sacred crop. Pork was added later when the Spaniards arrived in the 16th century and brought over pigs. These days, the stew is found all across Mexico, typically made by families on weekends or special occasions because there’s a lot of labor involved—from cooking the pork to making the chile sauce to the nixtamalization of the corn (soaking it in pickling lime so the kernel softens and sheds its skin).

Posole is the choose-your-own-adventure of Mexican cuisine. Start with a stew speckled with chewy bits of hominy and seasoned with lime and braised pork. Depending on the region, that soup could be green from jalapeños and tomatillos (if you’re in Guerrero) or red from guajillo or ancho chiles (in areas such as Mexico City and Jalisco). Then, choose from a selection of toppings: finely chopped onions, sliced avocado, lime, radishes, lettuce, queso fresco. Go big, or keep it simple. That’s the true beauty of posole: No two bowls look or taste exactly alike.

How to Make It

Combine pork shoulder, spareribs, 6 quarts water, and 1 tablespoon salt in a large stockpot. Bring to a boil over high, skimming off and discarding foam from surface during first 10 minutes of cooking. Place onion, garlic, ginger, bay leaves, and oregano in center of a large piece of cheesecloth; gather edges of cheesecloth together, and secure with twine. Add to pot; reduce heat to medium-low, and gently simmer, uncovered, 1 hour and 30 minutes.

Remove cheesecloth bundle from pot. Remove onion, garlic, and ginger; set aside. Discard bay leaves and oregano. Add hominy to pot; simmer over medium-low, uncovered, until rib bones can be easily removed from spareribs, about 1 hour and 30 minutes.

While pork mixture simmers, split ancho and guajillo chiles; remove and discard stems and seeds. Place half of the chiles in a large, deep skillet over medium. Cook, turning occasionally, until toasted evenly on both sides, about 1 minute. Remove to a plate; repeat procedure with remaining chiles. Return all toasted chiles to skillet; add water just to cover chiles. Bring to a gentle simmer over medium; cook until chiles are soft and rehydrated, about 15 minutes. Remove from heat; cool slightly, about 15 minutes. Drain chiles, reserving cooking liquid. Taste cooking liquid. If it tastes bitter, discard. If it tastes faintly of raisins, reserve 1/2 cup.

Transfer rehydrated chiles and either the reserved 1/2 cup chile cooking liquid or 1/2 cup water to a blender. Add onion, garlic, ginger, and 1 tablespoon salt. Process until smooth, adding splashes of stock from pork mixture in stockpot as needed to achieve consistency of applesauce, about 1 minute. Pour through a fine wire-mesh strainer into a bowl; discard solids.

Heat oil in a 10-inch skillet over medium-high. Carefully pour strained chile mixture into skillet. (Mixture will splatter.) Cook, stirring often, until reduced by half and darkened in color, about 30 minutes. (Partially cover skillet to reduce splatters, if desired.) Remove from heat, and set aside.

When pork mixture has finished simmering, remove spareribs from stockpot, and set aside until cool enough to handle, about 5 minutes. Remove and discard rib bones and tendons from spareribs. Chop meat into bite-size pieces, and return to stockpot. Stir in reserved chile sauce. Bring to a simmer over medium-low; cook until flavors meld, about 1 hour, skimming fat from surface, if desired. Stir in remaining 2 teaspoons salt.

To serve, place tostada shells; lettuce; chicharrones, if using; Cotija, if using; radishes; avocados; and limes in separate bowls. Ladle soup evenly among 10 large bowls. For each serving, place a pinch of oregano between palms; rub over and into soup to release its aroma. Serve soup alongside bowls of garnishes for diners to customize their servings.

Soaking dried chiles draws out their flavor, including bitterness, if prevalent. If the resulting liquid is sweet, incorporate it into the dish. Discard it if it tastes bitter.