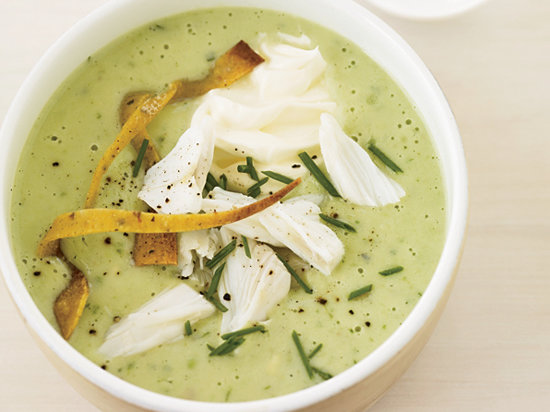 This tangy, luscious soup is an excellent make-ahead dish: Simply puree everything except the garnish, then chill. For a milder version, scale back on the serrano.

Chickpeas are used as the base for this Indian-flavored creamy (though cream-free) soup, which is prepared by first pureeing it, then simmering it, to save time.

Based on a brothy tortilla soup, this fiery, substantial soup is full of nutty-tasting barley, brown rice and bulgur, creating a dish that’s high in fiber.

This dish is based on the classic Korean noodle soup kal gooksu (or “knife noodles,” so named because the handmade dough is cut with a knife).

This hearty soup uses spicy smoked andouille sausage that is traditionally added to Louisiana specialties like gumbo and jambalaya.

For a healthier version of this crema, try using nonfat Greek yogurt instead of the sour cream.

Tanya Holland’s decadent crab bisque is studded with plenty of lump crabmeat. Thanks to a hit of cayenne and Tabasco, the soup has a sneaky heat.

The rice vermicelli soup pho is a staple all over Vietnam and this spicy beef version is the specialty of Hanoi.

Posole is a hearty Mexican soup or stew made with hominy (dried corn kernels with the hull and germ removed) and pork or poultry.